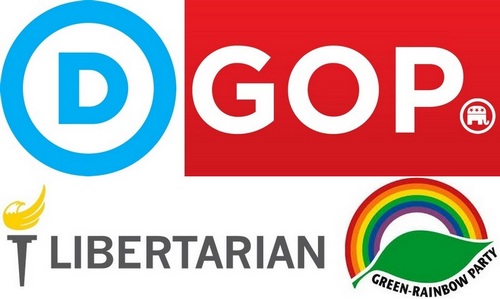 Above: In 3½ weeks, Southborough voters can vote in one of four political parties’ presidential primaries.

You don’t have to wait for Super Tuesday in March to cast your vote. Southborough has posted its schedule for early voting for the primaries:

Early Voting for the Presidential Primary Election will be held at the Southborough Town House, 17 Common Street, Southborough, MA during the following times:

Voters unable to vote during Early Voting or at the election on may request an absentee ballot be mailed to them.

Please contact Town Clerk Jim Hegarty if you have any questions.

Remember, in Massachusetts anyone who is registered as “Unenrolled” in a party can choose which primary to vote in. (That isn’t the same as being registered as “Independent”, which is actually a 3rd party for which there is no primary ballot this year.)

If you aren’t registered, or want to change your party designation, the deadline is Wednesday, February 12th. You can do it in person at the Town Clerk’s office or online here.

I was curious to see what the ballot choices are this election. In addition to the big two, ballots are available for two 3rd parties.

So who’s on the ballots?

15 Presidential candidates are listed, including four who have already dropped out. (There are also uncontested candidates for the state and Town party committees.)

Three candidates will run against the current President. (In case you missed/forgot the news, Democrat Deval Patrick isn’t our only former Governor running for President. This year, William Weld is on the Republican ballot.)

10 candidates are listed as running for the Oval Office, though Kim Ruff has apparently pulled out. (No contested committee positions.)

4 candidates will run for Chief Executive. (No contested committee positions.)

Roughly 40% of Southborough voters are enrolled as Democrats or Republicans and they can only vote for their party’s ballot in a primary election.

Less than .4% of Southborough voters are enrolled as either Green-Rainbow or Libertarian and they can only vote their party’s ballot in this primary election.

Approximately 60% of Southborough voters choose to remain as “unenrolled voters”, which most people have traditionally called “independent voters.” These “unenrolled” voters can select any of the 4 ballots available for the March 3 Presidential Primary Election. (Regardless of which ballot an “unenrolled” voter choses to vote in this election, they will remain designated as “unenrolled” until they request a change.

We’ve seen quite a few people change their part affiliation recently, and the deadline to change parties for the upcoming election is February 12, 2020.

If anyone has any question about voter registration, Absentee Voting, or Early Voting, please call our office and we’ll be glad to help.

Hi Beth, would you please promote this item (or a similar one) back to the top of the blog. Early voting starts on Monday. Thanks!

Of course I intend to remind voters today. But, thanks for following up.