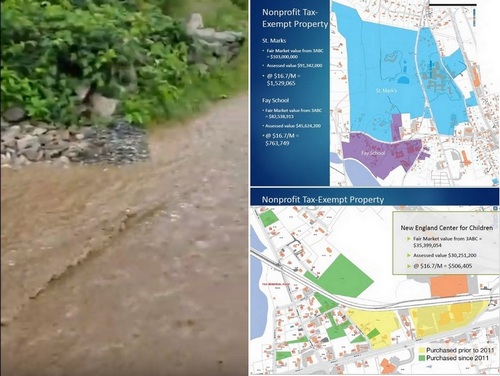 Above: Images shared in responses by readers with direct knowledge about some stories I recently posted.

A few recent stories prompted responses with details worth sharing. Some information comes from the comment section, which I know not all of you read.

Clarifying an official’s remark about looking at potential for closing a school, possibly Woodward

Yesterday, I covered a discussion at the Board of Selectmen and Advisory meeting on budgets. Advisory Chair Cathy Cook spoke about the efficiency and savings that a Capital Budget Committee could dig into. One item was the potential for closing a Southborough School. Cook said that the School Committee had indicated they were willing to take a fresh look at the situation.

I noted that Cook said the Woodward School building was a possibility. (I also noted that if anything happened it would be after long discussion and not on the Warrant for meetings this spring or fall.)

Based on comments on the post (including my own), Cook decided to wade in to clarify her remark. In a comment written last night, she posted:

I did not mean to imply that Woodward should be the school closed IF the decision were made to close one of the four schools due to lower enrollment. I do not know what would be the better choice of school. I did mean to say that Woodward could be a choice because the debt to build the school is almost paid off. That means we have received almost all of the reimbursement from the state for the construction of Woodward,

When we last studied the four vs. three school model in 2013 – the Study Committee concluded that it would be difficult to close Woodward because we would lose the significant amount of state reimbursement still to be paid on the construction. Since that is no longer the case – Woodward could be closed if a decision was made to close a school,

It is way too early to say anything more about this. Deciding to close a school would be a significant decision requiring much study and thought, The impetus to looking at this again is that we have significantly fewer students in K-8 today than ten years ago,

And to [a commenter on the thread] – the purpose of closing a school would be to save taxpayer dollars.

One week ago, I shared news on complaints lodged by residents about runoff water issues on the south end of Deerfoot Road.

I wrote about residents describing excessive runoff of water and silt from new property developments on the road.

What I didn’t have to share were any images to back up residents’ complaints.

(And we all know that a picture is worth a thousand words.)

That changed thanks to a comment last weekend that shared a link to the video right, posted to YouTube by Deerfoot Road resident Lisa Dunderdale.

This is a road, not a creek or a river.

The narrator swivels to show water running down the hill from the direction of where new homes were built, and explains that water isn’t being retained on the lot.

You can read more about the issues on the road here.

Last week, I wrote about two downtown Main Street homes recently purchased by St. Mark’s School. One aspect I covered in the story was that more land came off the tax rolls since last year’s Town Meeting debate about how to pursue increased PILOT donations from the schools. It included information on the assessed value of the properties owned and a map of St. Mark’s land.

A proponent of last year’s Citizen Petition Article, Patricia Burns Fiore, reached out. She stated that the land values I cited were off. She pointed out that the assessments weren’t based on updated market values. As she noted in a comment:

The town places an assessed value on all property, but in my research last year for the citizen’s petition I learned that the town does not update the assessments for the property owned by the private schools on any kind of regular basis because, as I was told by our town assessor, there is no need to update them because they do not pay taxes. A more accurate financial look at the property would be from the 3ABC’s which are filed with the town by each non profit in order to maintain their tax exempt status. This must list property owned and what the property owner considers a “fair market value.” At the time I did research for last year’s TM, St. Mark’s 3ABC fair market value was $103,000,000; Fay School $82,538,913; and New England Center for Children $35,399,054.

(I had updated the post to include that information, but some readers may have missed that.)

In an email, Fiore sent me two slides she compiled for her presentation to voters last year:

The map I posted (right) for St. Mark’s parcels is updated and more comprehensive (including two areas that were missed in Fiore’s map.) Plus, Fiore’s map doesn’t include Fay’s soccer field on the border of Marlborough. But mine didn’t include Fay. So, the point of sharing her downtown map is to give readers an idea of the amount of downtown area land owned by both schools combined.

The advocate for increasing PILOT contributions also wanted to share the amount of Fayville area property purchased by the New England Center for Children, especially since 2011.