The Southborough Fire Department is making public data on its emergency responses last month and year. Most of the data reports on responses to emergency calls in January. Some metrics also cover the past year.

Chief Steven Achilles asked me to share the information with readers. Click on the image below to enlarge. 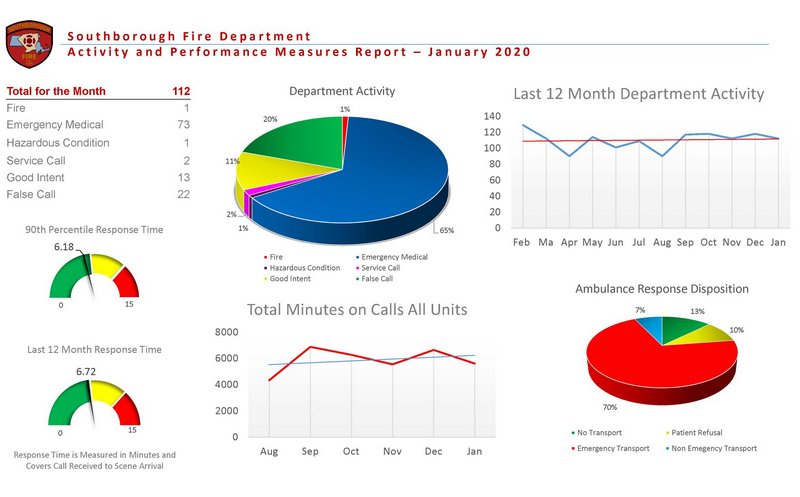 Some of the above text may be hard to read. Since a larger image doesn’t work well on the blog, I zoomed in on clickable subsections below.

The stats for emergency calls show that 65% were for “emergency medical” situations. (That was 73 calls out of 112 in the last month.) Another chart shows that 70% of the time the ambulance was called in, it resulted in an emergency transport.

A third of the emergency calls received last month turned out to not be for non-emergencies. 13 out of the 112 incidents were labeled “Good Intent”. Another 22 were “False Calls”. I spoke with Chief Achilles to get some clarity on the differences.

The labels follow the designations under the National Fire Incident Reporting System (NIRS). “False Calls” does include pranks or malicious intent, but Achilles assures that hasn’t been an issue in our town. The calls are most consistently false alarms from smoke or CO detectors that malfunction. There haven’t been enough repeat incidents by the same device to warrant any billing for incidents.

“Good Intent” covers other calls made for an emergency scare/concern that turns out to be unfounded. That could be “smoke” spotted that turns out to be steam or from a bbq. According to the NIRS reporting guide the category includes calls cancelled while responders are in route or if they show up to find that the injured party is no longer at the scene. It could also be a reported gas odor that doesn’t appear to be a real problem.

For January, stats show that for 90% of calls, emergency first responders were on the scene within 6.18 minutes (or less) of the call coming in. Over the past 12 months, responses were within 6.72 minutes for 90% of the calls. (90% is the commonly used metric for measurement. It’s considered a better indicator than averaging all times.) The reported data includes out-of-town mutual-aid responses.

The calls don’t cover all of the work the department does. The SFD is also responsible for fire inspections and public education. In addition, the staff has to keep on top of training and competency hours.

Chief Achilles intends to drill down on some measurements internally to better understand how different areas of the community are being served. He also plans to share the measurement reports regularly going forward. (He wasn’t sure whether that would be monthly or quarterly.)

Measuring the department’s responses and working to improve them is one step towards the potential pursuit of accreditation.

Achilles is already accredited as a Chief by the Center for Public Safety Excellence. He would ideally like to get the department accredited. The chief explained that it would strengthen the department. But achieving the status would require a substantial commitment by personnel and support of the Town. So, before trying to tackle that, he’s focusing on aligning the department with CPE’s principles.

Southboro FD is a great department! Thank you for your service to the community! I feel lucky knowing we have these emergency services there for us at a moments notice.

The ambulance response disposition chart is a good reminder that you have the right to refuse the ambulance ride. A large number of transports are cases where they recommend you get checked out as a precaution. Well, that precaution can cost you very big bucks when you could have just as safely been transported to the doctor via a family member or friend.

Given recent discussion over PILOT payments I am curious if a breakdown of calls related to non-profit education centers would be possible. I am guessing it’s not completely knowable but some estimate may be illustrative in any future discussions.

Both the fire and police departments were very helpful last year when I was compiling data for the PILOT citizens petition. The police department provided a site analysis for 2017 and 2018 with the number of total calls for the departments as well as breakdowns for each private school and the type of call (i.e., fire alarm activation, medical emergency, etc). I was also given a list of other times town personnel made professional visits to the schools (lockdown drills, wellness presentations, ALICE drills, alcohol presentations, etc.) as well as required inspections (kitchens, fire alarms, etc.) that are made to the schools on a regular basis.

Thanks Patricia (for original diligence and sharing)!

Perhaps it would make sense for both PD and FD to make those part of regular reports? Sounds like something they are (or at least are able to) collect and share.

And again, appreciate the information!

Agree with Curious, this might be helpful, and if nothing else, would be great to get the 2019 figures as it does seem that there may be some renewed push around the PILOT issue, especially as St. Marks continues to buy up more properties and takes more money off the tax roll of the town.

All services rendered to Fay and St Mark’s needs to be kept up to date. One of these days there will be a majority on the BOS that actually want to address this problem. Of course the two schools could just do the right thing – not going to happen. Our state reps could get in the game and threaten legislation – not going to happen.

Which will continue to leave us paying the bills. No problem for some in town and certainly no problem for these illustrious institutions and there well-heeled customers. Where’s Lizzy when you need her.