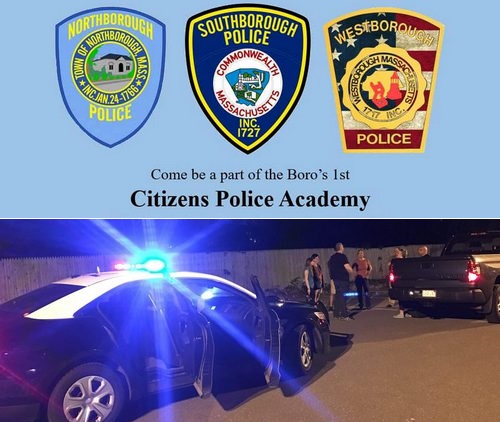 Above: Ride along and learn about community policing from local PDs. Don’t worry, you won’t be charged – the academy is free. (images cropped from Facebook posts)

Southborough residents are again invited to get a free lesson in policing. This time, it will be a joint boroughs run affair. The Southborough Police Department is partnering with Northborough and Westborough to offer a Citizens Police Academy this spring.

Not to be confused with the summer camp, this program is targeted at adults aged 18 and older.

For the “first” year, the program will still be held in Southborough. The academy will be run out of the new public safety facility. The larger conference room will allow the program to be offered to more students. But the shared program means fewer Southborough residents can participate. So, you better apply soon if you want to secure a spot.*

The Southborough Police Department is joining forces with the Northborough & Westborough Police Departments, for our first ever Boro’s Citizens Police Academy. Southborough residents interested in applying, please send an email to Officer Stephen Neivert at SNeivert@southboroughma.com – or stop into the station and ask the dispatcher for an application. You will receive an application packet, which must be completed and submitted no later than March 7, 2020. The Academy will include tours of our stations, demonstrations of equipment used by our departments, introduction to specialized officers (such as S.W.A.T. officers), patrol procedures, a ride along, and more. More details to follow!

The informational program is scheduled to run for eight consecutive Wednesday evenings beginning April 1st, 6pm – 9pm. . . Topics such as patrol procedures, criminal law, and motor vehicle law will be covered. There will demonstrations from specialty units as well.

In 2017 & 2018, the SPD ran its own Citizens academy in town. Police Chief Kenneth Paulhus called the past programs “highly successful”. (You can check out more pics from 2017 on Facebook.)

In past years, the SPD promoted that program as follows:

The Citizen Police Academy is designed to familiarize citizens with the operation and functions of the Southborough Police Department and Communications Center. Classes will cover various topics such as Criminal Law, Patrol Procedures, Evidence Collection, Domestic Violence, Motor Vehicle Enforcement, Court Procedures, and Use of Force. Additionally, participants will complete a two hour police ride along, and a tour of the Worcester County Jail. The ride along will allow each student to observe Police Officers while on patrol. Classes will be taught by Southborough Police Staff, Supervisors, and Emergency Dispatch Personnel.

The overall concept should be similar this year, though less Southborough centric. Officers from all three towns will co-run the program. Officer Stephen Neivert and Officer W. John Woodford III will represent Southborough. Paulhus expected Northborough and Westborough to each be represented by one officer.

In January, Paulhus asked selectmen for permission to run the revamped academy this spring. The chief reminded that the boroughs have been collaborating on the junior academy for teens. (Another academy that began as an annual SPD run event.) He said that resource sharing has been working well. They also work together on the jail diversion program.

The chief told selectmen that citizen’s police academies have been very successful across the country for:

building relationships and a more in-depth understanding of the police profession.

Selectmen were enthusiastic, citing rave reviews from past participants.

*Past Southborough academies welcomed up to 20 residents. This year, Paulhus believed they would be able to accommodate 30-35 participants. But, they will try to balance that across the towns. So, only about a third of those spots should be for Southborough residents.