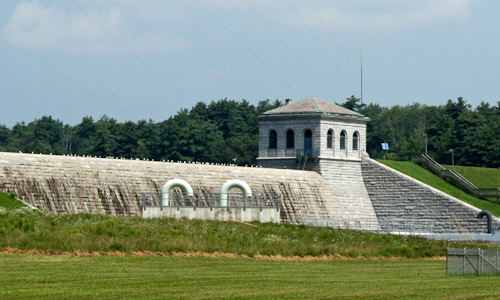 Above: This MWRA dam is part of the MWRA system. According to a discussion at this week’s BOS meeting, increasing water authority rates is one reason the Town needs to increase Southborough’s water bills. (photo by Susan Fitzgerald)

Selectmen approved a new water rate plan for Southborough users this week. The plan is projected to charge a 25% increase for average households and a major fee hike for high end users. Town officials hope that for low use residents, especially seniors, the increase will be small.

The financial impact won’t hit until July bills come in. But charges will be based on water used following March readings. (So, don’t wait until the summer to re-evaluate your water usage!)

Public Works Director Karen Galligan noted the percentage increase will be “huge”, but “dollarwise it’s not that bad”. She told the board that the change would change Southborough from the 9th least expensive out of 10 on the MWRA plan to the 6th least.*

New rates slice the tiers differently. An emphasis was put on keeping rates low for residents who use the least water and with discounts for those seniors. According to Galligan, the average residential household uses 2,600 cubic feet of water per bill. (A cubic foot is noted as equivalent to 7.48 gallons in the memo. So presumably that means about 19,448 gallons per quarter.)

The study highlighted examples of the financial impact on residents and businesses at a variety of usage levels (click to enlarge):

The increase shown for residents ranged from less than $15 per year to over $17,600. For average residents it is projected as about $26 per bill or over $100 per year.

Selectman Sam Stivers said that as a member of the Public Works Planning Board, he approved the new rate plan as the “best of several not very desirable options.”

Rates in Southborough hadn’t been adjusted since September 2016. That was based on a vote in 2015, the last time the rates were studied. This week officials discussed the need for annual reviews going forward. Board of Selectman Chair Brian Shea urged that course rather than changes that jump every five years. Galligan agreed.

In 2019, Town Meeting voted to create an Enterprise Fund for water. The Warrant explained:

This article formally creates a Water Enterprise Fund, which segregates water revenue and expenses from General Fund revenue and expenses. An enterprise fund is considered the best practice to promote and maintain long term financial sustainability for water operations & activities.

This week, Galligan told selectmen that based on the new standing, she learned from Finance that the current water rates aren’t covering costs that include bonds. Looking forward, she stated that she will strive to stretch out capital planning for the water department to put less burden on ratepayers.

Later, Town Administrator Mark Purple explained that the yet-to-be-certified Enterprise Funds complicated finances this year. In the future, DPW will be able to use funds to offset rate increases in certain years if needed.

Stivers also noted that the MWRA increases its water usage rates 5-6% each year. He advised that was another reason the Town needs to keep looking at its rates annually.

Purple told the board that the company that prepared the study for the DPW leaves them with tools to reevaluate the situation each year.

Click here to read the memo that was discussed at the February 12th meeting. Selectmen approved its recommended changes with the correction to Tier 3 noted by Galligan in the meeting.

*Galligan was referring to a list of 10 communities that receive MWRA water services but not the sewer. (That doesn’t include the towns that are listed as “partial” for water.) The memo to selectmen referred to the change as making our town the 8th least expensive. But in Tuesday’s meeting, she indicated it was the 6th. (That is assuming that other communities don’t change their rates.)

Another reason to shut off our irrigation this Spring.

Seniors get a break on water rates?

It would be 65. I don’t know how they have tracked which customers are seniors.

If you are 65 or older, you can check your most recent water bill to ensure that you were getting the 25% discount on the “base rate”. Under the Charge Summary column, the first line should be the charge based on the meter size. If it was the discount rate, it should refer to “SEN Charge” after the meter size. And it the charge should correspond to the senior rate for the meter size in the chart at the bottom of the bill. If it didn’t, then I would reach out to the the Town about the error.