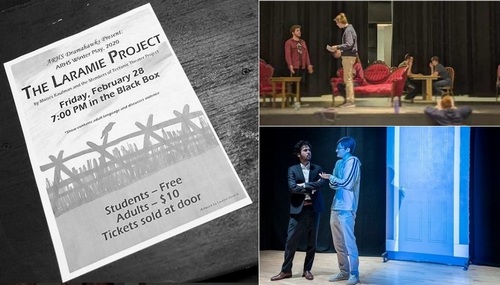 Above: ARHS’ theater program is putting on a serious drama this week and hosting dramas by two other schools this weekend. (images clockwise from social media by Dramahawks, Gloucester High Theatre Program, and St. Sebastian’s School).

Algonquin’s theater program is taking on a serious subject for its winter play. The Dramahawks are also hosting performances by two other high schools this weekend. The public is invited to attend either just the ARHS play on Friday night or all three on Saturday.

This week, students are performing in “The Laramie Project”. It is a documentary style look at a real-life brutal hate crime against a young gay man and its aftermath. The play is based on the 1998 murder of 21 year old Matthew Shepard. The homophobic crime took place in Laramie, Wyoming.

The theater company behind the play writes:

Over the [year following the crime], Moisés Kaufman and a team of writers and actors from Tectonic took six trips to Laramie, where they interviewed citizens of the town – some unconnected with the tragedy, and some intimately involved. Using Moment Work, the company created The Laramie Project, a stunning theatrical examination of the immediate reactions of Matt Shepard’s community to the murder and to the underlying bigotry and hatred that enabled it.

Students will perform the play for students during school hours on Thursday. On Friday and Saturday, public performances will be held in the small Black Box Theater.

The Friday, February 28th performance is at 7:00 pm. It’s free to students and $10 per adult. (Note: There are warnings about adult language and descriptions of violence.)

The Saturday production is part of a high school theater festival. That runs from 2:00 – 5:00 pm and costs $12, covering three plays.

Gloucester High students will be performing another play inspired by a real person, though not a documentary. “Antigone in Munich: The Sophie Scholl Story” is a dramatic “imagining” of one of the “coming of age” of a young political activist who was part of a non-violent resistance to the Nazi regime. (You can read more here and here.)

Slings & Arrows Players from St. Sebastian’s School will perform an original piece of fiction written and directed by students:

“The Door” concerns a young man, Cam Howell ’21, who chokes on a corn chip and has a resulting near-death experience. In fact, he finds himself at the DNDE, the Department of Near-Death Experiences. He meets Death, played by Alessandro Barbiellini ’21 with whom he must play an all-important chess match.

This month is the 20th anniversary of the first ever performance of “The Laramie Project”. Directed by Fine and Performing Arts teacher Maura Morrison and science teacher Brian Kelly. . .

“It’s an opportunity for a lot of kids to get involved and to learn the story of [a significant] hate crime of our recent time,” Kelly said. “It shows that we’ve come so far, but also not necessarily far enough in the way that we treat other people and in the perceptions that we have of other people.”

You can read more, including cast interviews, here.