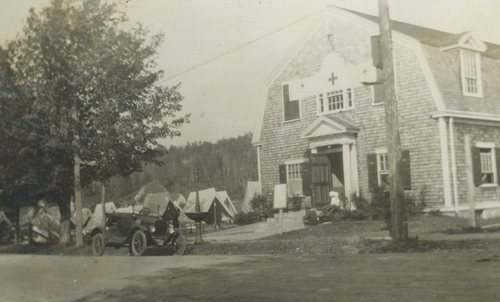 The current pandemic has prompted many comparisons and remembrances of the 1918-19 influenza pandemic. It prompted one resident to reach out and share photos of Southborough during the outbreak.

Some residents and local historians will recall that Fayville Hall’s historical background includes its use during the outbreak as a health center with hospital tents. Southborough’s Charles Bagley captured that sight on film.

Photos include one of a soldier wearing a face mask while helping patients.  (Click thumbnails to enlarge.)

Bagley’s Grandson Paul Redmond grew up on East Main Street. He shared the photos (with help from his son Patrick) and some background.

The American Legion Post at the Community House was named after Charles’ brother Leo Bagley.* Leo was the only Southborough resident to die in service in WWI. He died at Camp Rariton, NJ in 1918. According to Redmond, Bagley was a victim of the flu.

Redmond notes that the brothers were from a “very large group of Bagleys in Southborough”.

some on White Bagley road along the area on both sides of the railroad bridge concentrated where Bob Seeley’s farm was, many in houses moved up from the land when the reservoir was dug. Another small group was on Walker St behind St Anne’s Church. Charles was of the family which had the farm on both sides of the east end of East Main St bounded by what we called the “lower rd.” to the east.

The photo he shared of Charles and Ida on their front stoop in 1918 (also taken by Charles) reminds me a lot of the current Front Steps project.

While the two may look grim, it’s worth noting that smiling in photos didn’t start becoming popular until sometime in the 1920s.

*Later the post was renamed Bagley – Fay in recognition of Harold E Fay, killed in action during WWII.

This is so interesting, thanks for sharing!

This is why Fayville Hall should be saved and preserved.Never torn down.

Agreed. This is an important building. Of course, I realize that funds are needed — and will be needed — for higher priority items right now, but when this is all over, we should remember how many lives it helped save in 1918.

I know I am an antagonist but it’s worth saying, question? Why save it? out of sentimentality for what? Second question who’s going to pay for you? You? I don’t think so. I would also like to have a second home on the Cape but I can’t because my taxes and Southboro are $1100 per month. I wish, but I cannot.

Beth, could you send us copies of these photos for our archives at the Southborough Historical Society? Highest res you have. Thanks~!

The owner of the photos has original items like that he’d like to talk to you about donating to SHS. I’ll email you his contact information.