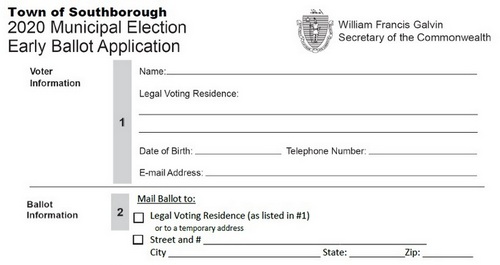 The Town Election is yet to be rescheduled. Thanks to special state legislation, that doesn’t mean you have to wait to vote.

Applications are available now for early ballots. And you don’t have to claim a planned absence to apply.* This year, every registered Southborough voter is eligible to apply to vote by mail.

(If you aren’t yet registered to vote, you can take care of that here. You have until 10 days prior to the election to do that. But, given warnings about the turnaround on the mail-in ballot applications, you’ll want to act sooner than that.)

Applications can be submitted through email or the Town’s dropoff box.

While you can apply for them now, I personally recommend holding off on casting ballots. (And if you’re worried that you may misplace your ballot if you get it too soon, then maybe you should hold off a bit before applying.)

This year, there is a race for the Board of Selectmen. Three candidates are running. Due to the pandemic, they haven’t had a chance to publicly campaign. Given the importance of the position, I’d wait to give them that chance.

Running for the two seats on the board are:

The Town needs to give voters 20 days notice before the election is scheduled. The election could be postponed as far as June 30th. So, we can afford to give candidates some breathing room to get their messages out.** (I’m still hoping that some version of Candidates Night can be offered this year.)

If you believe you’re familiar enough with the candidates that you don’t plan to wait. . . Be aware of the write-in candidates for two of the vacant seats on the ballot.

No candidates returned papers in time to be on the ballot for the following positions. But the residents currently serving in those seats would like your votes (and no one else has made their interest known to me or the Town Clerk):

To win those seats, the candidates just need a simple majority (which could be as little as one vote).

There is one other vacancy. The Housing Authority has two available seats and only one candidate. However, no one has publicly asked for write-in support for that post.

Although the deadline to apply for a ballot to be mailed is 12noon on the day before an election, you must allow enough time for this application to be processed, sent to you via the US Mail, and be returned. Allow at least 10 days!

Ballots must be returned to the Town House (not the polling location) by the close of the polls on election day.

Applications can also be mailed or dropped in the green mail box outside of Town House – 17 Common Street.

*For prior elections, voting by mail required an Absentee Ballot. That form stated that only the following voters are eligible: A registered voter who will be unable to vote at the polls on Election Day due to absence from the voter’s city or town during polling hours, disability, or religious beliefs. OR A non-registered voter who is: A Massachusetts citizen absent from the state; An active member of the armed forces or merchant marines, their spouse or dependent; or A person confined to a correctional facility or jail for reasons other than felony conviction.

**I will be emailing candidates today to encourage them to submit a letter to the editor reaching out to voters.