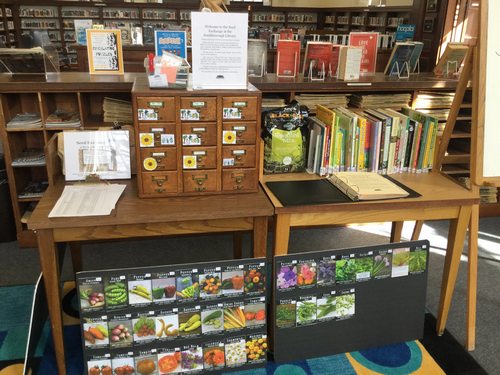 Above: The Southborough Library launched its seed exchange this spring. Instead of coming in to check out packets, you can sign up to get them through the mail.

[Editors note: The Library has announced that due to overwhelming response, the program is now closed. Scroll to bottom for more.]

If you’ve been thinking about starting a garden, you’ll want to check in with the Southborough Library to get some free seeds. (The program has proven popular, so act quickly.)

Earlier this spring, I wrote about the Southborough Library’s planned launch for its new Seed Exchange. That was targeted for mid-March, but as with just about everything else these days, plans had to be altered.

Two weeks ago, the Library launched the new initiative, inviting the public to request seeds through the mail. They posted:

The staff at the Southborough Library would like to move forward with the Library Seed Exchange. In light of the COVID-19 Pandemic, we have made some changes to the exchange. The library is going to move the exchange as an online by-request-only service for the time being. . .

The hope is that this gardening effort would be reminiscent of Victory Gardens. Victory Gardens, also called war gardens, were vegetable, fruit, and herb gardens planted at private residences and public parks in the United States, United Kingdom, Canada, Australia, and Germany during World War I and World War II. Besides indirectly aiding the war effort, these gardens were considered a public morale booster in that gardeners could feel empowered by their contribution of labor and rewarded by the produce grown. This made Victory Gardens a part of daily life on the home front.

We would love to see how your garden is growing and would encourage you to email us pictures to rdonovan@southboroughma.com so we can share them with the broader community on our social media.

Happy planting. Thank you for helping the Southborough Library grow!

Initially, patrons could choose up 10 packets from a long list of flowers, herbs, fruits and veggies. The response was overwhelming. They received 105 requests in 10 days.

The request form has now been updated. Patrons currently can request up to 6 packets per family, selecting by category of flowers, vegetables, or a mix of both.

Participants are encouraged to share photos of their gardening efforts through email (to rdonovan@southboroughma.com) and/or on social media using #sblibSeeds.

Photos aren’t the only thing the Library hopes gardeners will share. The concept behind exchange is that plants can ultimately be harvested for seeds to donate back to the Library’s catalog for next year.

The Seed Exchange idea was brought to them by a Library patron who had seen its success at another library. It was made possible through the sponsorship of the Friends of the Southborough Library. Seeds were contributed by volunteers in the community.

Due to an overwhelming immediate response on our second round of seed orders, the Southborough Library Seed Exchange is now officially out of seeds for the season. Thank you for your participation – we had 150 total orders – which is a lot more than we thought we would get for the first year of the exciting new library offering. Library Director Ryan Donovan would like to thank all the members of the Southborough community for their participation. Thank you for helping your library grow!

Just fill out the form with the necessary information and the library’s staff will mail you seeds.

How/where do I find the form to fill out for seeds?

Oops. The comments make me realize that I forgot to include the link! I’ll update the post to include it. But you can visit: https://bit.ly/sblibseeds2