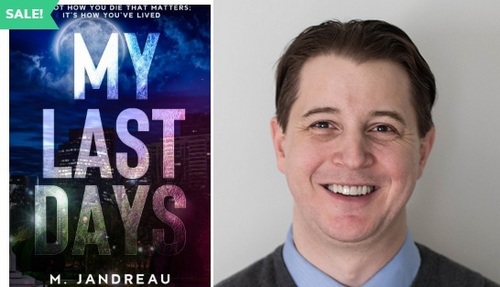 Above: M. Jandreau is offering a discount to Southborough readers interested in his new novel coming out next week. (images from mjandreau.com and Facebook)

Warning: This may start off seeming like a bit of déjà vu.

I’m writing about a Southborough author whose new book is launching in the midst of the Covid-19 pandemic. The book focuses on a serious, life changing diagnosis. But, unlike the one I wrote about last Friday, this diagnosis is fictional.

Southborough novelist M. Jandreau describes his novel “My Last Days” as “the story of a not-so-nice guy who’s diagnosed with terminal cancer.”

I am going to die.

No matter how many times Andy Costello rolled those words around his mouth, the bitter aftertaste of regret lingered on. For his life had not been a journey of happiness, growth, and friendship, but of selfishness, thoughtlessness, and worst of all—loneliness.

But on that fated afternoon, high up in a Massachusetts hospital when his terminal diagnosis is declared, Andy’s life does not hit a dead end but an intersection. A crossroad of choices; either be absorbed by self-pity or make the most of the time he has left. Determined to make amends for his past indiscretions, Andy’s journey of repentance and rediscovery invites old faces he thought he’d never see again, as well as new ones from the most unexpected places.

Jandreau’s novel comes out on May 6th. It’s self-published, which means it’s also self-promoted. To that end, he’s offering a discount on the hardcover and paperbacks for Southborough readers.

Use the code MYSOUTHBOROINMYHAND when you shop mjandreau.com. That will get you 20% off and free shipping – which is actually his in-person delivery “at a safe distance, either on their porch or in their mailbox”. (You don’t need to wait until the 6th to order copies. He’s currently wroking on fulfilling pre-orders.)

The novel is Jandreau’s second. His first book, “A Sour Chord” was published shortly before he and his wife moved to Southborough in late 2014. The writing bug is something that Jandreau tells me has been with him much longer:

Writing has been a major part of my life for almost thirty years, going back to my pre-teen days when I’d write songs with any of the bands I’d been in over the years.

Jandreau’s day job is software and web development. In 2013, he started the journey to become a novelist on the side:

Writing had always been a passion in my life, so I finally took the steps to move forward and change my passion into something concrete instead of just something in my head.

The author is willing to chat with any interested book groups. You can email him at m@mjandreau.com or through his website.