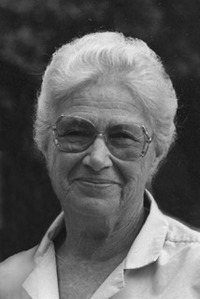 Eleanor Jeanne (Onthank) Hamel, 98, died Sunday, April 26, 2020. She was the beloved wife of the late Charles Francis Hamel for 68 years.

Born in Framingham, she was the only child of William Henry and Margaret Eleanor (Thompson) Onthank.

In 1939 Eleanor graduated from the former Peters High School in Southborough as salutarian, where her mother was a French teacher. She earned her B.S. in 1943, from Simmons College in Boston.

For the next two years she worked as a dining car hostess on the New York/New Haven railroad and lived in New York City. On May 10, 1945 she married Charles ‘Fran’ and settled into Eleanor’s childhood home, the Onthank family homestead with Eleanor’s father, the Onthank patriarch, William, whose wife had died suddenly in 1939. Eleanor represented the eleventh generation of Onthanks living continuously in Southborough.

She is predeceased by her grandson, Nathan Long.

Funeral services are private and burial will be in Southborough Rural Cemetery.

On behalf of the entire membership of the Southborough Historical Society, I would like to commemorate the passing of a true legend in our town’s history. Eleanor was supremely special, and much of what we have preserved today at the Society is owed to this remarkable woman. I’ll be writing more about Eleanor Hamel on our blog shortly, but for now I can only say, godspeed my old friend.

Thank you for your kind words. She is and will be missed beyond words. I had the privilege of growing up living next door (she was my grandmother), it has changed so much here without them but there are always reminders of them. I wish she could see her magnolia tree blooming..! Again, thank you for your kindness.