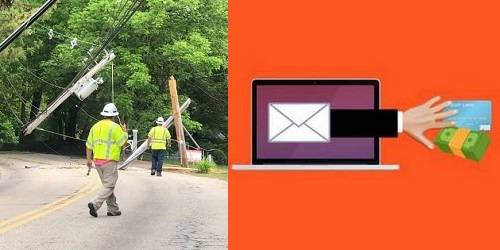 Less than a week ago, I rounded up public safety news. Since then, there were already three new incidents worth sharing. One is an attempted crime that police are warning the public to avoid being a victim of. The other two are crimes which the police are hoping the public can provide information on.

(No, it’s not a scam run by St. Anne’s Church. It’s a scam from someone falsely claiming to be from St. Anne’s.)

Occasionally, the SPD alerts Facebook followers about phone and email scams to avoid falling for. Usually, they’re generic (like the “Apple account”scam they warned about in mid-May). This latest one they shared earlier today was purportedly customized to scam charitable parishioners of a Southborough church:

Last night one of our officers took a report of an email scam, from one of our Southborough residents. The reporting party advised that they had received an email that appeared to be from the priest at St. Anne’s Church in Southborough. The email was requesting the resident to send $300 in Google Play gift cards, in order to help a “sick Parishioner” of St. Anne’s. The resident, recognizing that it was a scam, did not purchase the gift cards and reported the incident to the SPD. St. Anne’s was notified, and an email warning was sent out to parishioners.

Once again, please do not purchase gift cards as a “payment”, “donation”, or any other means of currency for someone you do not know. This is a very common method for scammers to receive untraceable money from a victim.

Thank you to our resident for reporting this scam, so that we can warn others.

On Saturday, the SPD posted to Facebook information about an alleged armed robbery and a request for information from the public:

At approx 4:45 pm last night (Friday May 29th), a male subject entered the business located at 7 Turnpike Road (Bill’s Liquors) and demanded money from the cashier. The male was described as a Hispanic male; approx. 6’2”; approx. 185-200 lbs, and approx. 25-35 years of age. He was wearing a blue surgical mask, and a silver handgun was displayed in his waistband. After demanding money from the cashier, the male then fled the area in a vehicle parked nearby.

This incident is currently under investigation by the Southborough Police Department’s Detective Division, and we ask that anyone who may have information regarding this incident, to please contact Detective Keith Nichols or Lieutenant Ryan Newell at (508) 485-2121. Thank you.

Later that morning, there was an incident reported on Pine Hill Road. On Facebook, the Southborough Fire Department posted news (shared by the SPD) that the road was closed and the public should seek alternate routes. They also posted photos of the broken utility pole causing the closure. Southborough Wicked Local characterized the incident as a “hit-and-run crash”:

The vehicle that caused the incident did not remain at the scene, according to police Lt. Ryan Newell. . .

It is not known what type of vehicle struck the utility pole. . .

Newell said police are investigating the incident and ask that anyone with information about what occurred to call the Police Department at 508-485-2121.

Meanwhile, John LoVorso, a resident up the street from the incident commented on Facebook with a slightly different take, clarifying:

a truck snagged the power line and snapped the pole. It was loud.

Acknowledging what’s happening outside of our small town’s borders, the SPD shared on Facebook their support of the following statement by the Massachusetts Chiefs of Police Association:

The Massachusetts Chiefs of Police Association, representing Police Chiefs in all 351 cities and towns and most college campuses, denounces the egregious actions taken by four members of the Minneapolis Police Department, whether by action or inaction, that resulted in the death of George Floyd on May 25, 2020. Our Massachusetts Police Officers have thoroughly embraced the six pillars of the principles embodied in the final report of the President’s Task Force on 21st Century Policing, and remain committed to professional conduct, democratic policing and procedural justice for all people.

In happier news, they updated that Southborough Police & Fire participated in 60 Birthday parades this spring. While that program has ended, they are hoping that appreciative parade watchers have some photos to share with them.