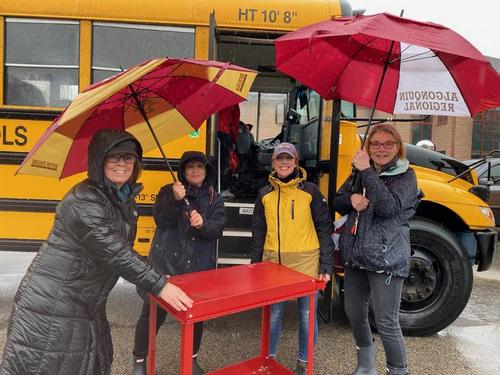 Above: I shared back in April photos of our public schools’ nurses delivering lunches. This week, their work was covered by news stations across the country. (contributed photo)

I’ve previously shared how the district’s school nurses are working during the school closure — including their regular deliveries of school lunches. Yesterday, the work of nurses and cafeteria workers was documented in a feelgood story shared by local news stations across the country. The story was also used to highlight the need behind the deliveries and a related relief bill yet to pass in the US Senate.

The story was reported by a 2005 graduate of the district. Chris Conte, a Northborough native, is currently a reporter for Scripps Media which distributed the video. (Due to their copyrights, I can’t embed the video here.)

In a 2016 interview with the Community Advocate, Conte credited one of his Algonquin teachers (Tom Alera) with “contributing to his success as a television reporter”. It appears he looked back to his roots for the story distributed yesterday.

Viewers of news stations in places including Nashville, Las Vegas, Denver, central Texas, and Detroit, learned about the Northborough and Southborough program:

“There’s a greater need now with people losing their jobs, so the need has grown,” [Mary Ellen Duggan the wellness coordinator for the Public Schools of Northboro and Southboro] said sitting inside a school bus driving around town.

To eliminate obstacles for families, this school district is using school buses to drop meals off for kids. Every morning about a half-dozen buses pull up to the district’s high school, where cafeteria workers help load brown bags filled with meals into buses. The food then gets driven around both towns and dropped off with students who might otherwise not have food at home.

But the district is also using this food delivery as a chance to check in on students who might be falling through the cracks. Aboard every yellow bus is a school nurse, who is not only dropping meals off but also making checking on students mental and physical health.

“Sometimes we’ll get emails from a school saying someone hasn’t logged into class in a while, so we check on those kids,” Duggan added. “We ask if they need anything, if everyone in the house is okay and if everyone is healthy.”

It’s an idea this district hopes others across the country will want to emulate, especially at a time when so many families are struggling. Nationwide, 29.7 million kids rely on free or reduced lunches, and there are concerns the program could be broke by fall. The House’s most recent relief bill would give the program $3 billion, but so far, the Senate hasn’t taken action on the measure. The program works to give free or reduced-priced lunches to children under the National School Lunch Program.

The video also brings viewers into the cafeteria kitchen and follows Duggan on one of her bus trips. The story appears to be part of “The Rebound” series being carried by the stations.  You can read the full story and watch the video courtesy of The Denver Channel here.)