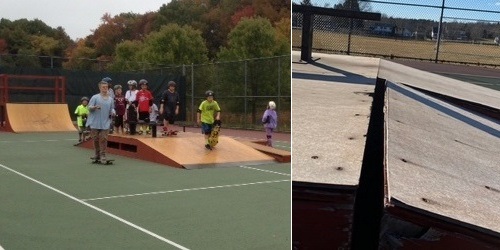 Above: In 2014, Recreation was excited to offer the community a long-lobbied-for skate park. Six years later, the department authorized hauling equipment in disrepair away. (images from contributed photos)

I followed up for more details on why. (Especially since, at in a prior meeting, Rec Commissioners indicated the park was getting a lot of use despite efforts to keep people out.)

Rec Director Tim Davis clarified that safety issues for that facility weren’t related to the pandemic. The equipment had deteriorated to the point that it was unsafe for use. (Looking back at minutes from 2018, it appears the park was already closed that spring as wooden ramps were determined no longer safe for use.)

Below are a few of the photos he shared highlighting the problems.

Meanwhile, locks have repeatedly been cut to allow unpermitted access. That sped up the Town’s need to dispose of the equipment.

Given the history of the skate park project, I shouldn’t be surprised that skateboarders might use dangerous equipment. In 2009, then-Rec Director Doreen Ferguson told the Board of Selectmen of skateboarding teens in town that they “live, eat, and breathe” skateboarding:

They are disciplined and self-motivated. They’re practicing all the time, but they’re doing it in unsafe locations like the train station.

At that time, a large contingent showed up to lobby for a skateboard park. It was a cause they had already been pushing for years. The project, proposed as a concrete court, was estimated as one that would cost $70K-$100K. Given the cost and economy, there wasn’t enough support to make it happen.

A less costly version was later identified, wooden equipment. Through a combination of a grant and skateboarding class fees, the Town was able to build a park on the Finn tennis courts in 2014. They cited the location as chosen since those courts weren’t widely used.

Four years later, the Town sought community feedback on whether to invest in repairs or use the court for another purpose. (That 2018 post also includes Ferguson’s recap of the history of skateboarding classes and the park.)

Ferguson informed me that the 2018 survey feedback indicated that people wanted the court used for other things. The commision decided to seek quotes on repairing the court to use for basketball and tennis before deciding how to proceed.

This week, Davis explained that given the decreased department revenue, fixing the court is on hold for now. He added:

I am hopeful to find a new home/location and create a skatepark at some point in the future. This has become a goal of mine.

That’s ok… with the money we save on the skatepark we can hire more cops (which we are doing) to harass the kids away from more dangerous and public spots. /partial sarcasm

I don’t know what defunding the police means (honestly… I need to read more)… but re-evaluating the priorities of our community and finding ways of reducing criminality via prevention vs enforcements feels like a great conversation to have.

I must admit, I was surprised to hear that we had one in the first place.

It would be greatly appreciated if you would allow us the remove the top surface and reuse it at Uxbridge Skatepark. This material is always needed and doesn’t break down over time and we can go there and remove it ourselves. No reason to throw it in the dumpster if it can be used to better a community.

The blog isn’t the appropriate forum for that kind of request. I just cover Town news and events. You need to directly contact Southborough Recreation. You can email Recreation@southboroughma.com