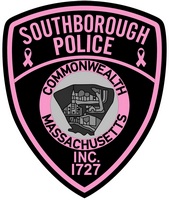 The Southborough Police recently issued an alert about people acting suspiciously in Town last week. (In other words, it looks like some intended burglaries may have been thwarted.) Rather than just sharing that news, I looked back to roundup other news on the SPD worth sharing.

News includes a discussion with the Board of Selectmen on issues like training and use of force policies. It also includes the reason for the “Pink Patch” to the right. This month is the SPD’s annual campaign to support the fight against Breast Cancer.

Here are the highlights.

Earlier this summer, the police warned the public to lock up cars left in driveways/on streets – and not to leave valuables or keys inside. (That was based on a spree of thefts that they have reason to believe could be repeated.) Last week, they posted a notice on Facebook that reminds the importance of locking up houses and garages. It also means if you see something suspicious to report, be sure to note important details:

We just wanted to make our residents aware of two suspicious incidents that occurred in town recently. Both incidents occurred on Tuesday, September 29th, 2020- one occurred at approx. 1100 hrs, and the other at approx. 1200 hrs.

The first incident involved a resident of Flagg Road reporting that a male party was in their back yard- and that when they asked what he was doing there; he stated that he was there to mow the lawn. The homeowner reports that he (a white male in his 50’s with receding, light blonde hair), then left the area. There was no known vehicle or direction of travel.

In both instances, no identifying information was able to be provided. Please be aware of these incidents, and if possible (and safe); if this type of suspicious behavior happens near or to you- please try to obtain info that could help responding officers (license plate of vehicle; direction of travel; color of clothing; etc). * We will also use this opportunity to remind residents to lock your house and vehicle doors, and please secure your valuables. *

If anyone has any additional information regarding either of these incidents, please contact Det. Keith Nichols or Lt. Ryan Newell at (508) 485-2121.
Thank you!

In August, the SPD welcomed two new officers, Jeffrey Norton and Brandon Donahue. The pair had just completed their police academy training. In September, the BOS authorized hiring of Special Police Officer Tyler Lu. Under the FY21 budget, the SPD is looking to get Officer Lu into a full time police academy in January. If one isn’t available, they’ll seek a waiver to temporarily shift Lu’s position to a full time officer. (Click images below to enlarge.)

Discussion with Selectmen on Training, Use of Force, and more

In early September, the BOS asked Chief Kenneth Paulhus to overview SPD’s policies and process on hiring, training, use of force, and handling complaints. Chair Marty Healey referred to 2020 as a year that every community has had to “take stock” on how they are handling issues including social justice and inclusion.

Healey asked how they cast as wide a net as possible in recruiting. Paulhus said they have 17 accreditation standards to follow on hiring and the equal opportunity process. The most recent job posting for the Special Police Officer hired last month brought in 70 applicants, with no shortage of diversity. He referred to social media as well as posting on a job search site. That site also brought in a record number of applicants for the police dispatch position.

Paulhus stated their recruitment pool is increased by their willingness to interview candidates without an advanced degree. He said he’s found some of the best officers didn’t have a degree. The Town also offers tuition reimbursement so they can encourage team memberse pursuing a degree. Paulhus noted that they are always looking for the best fit for the dept, community, and applicant.

The Chief did revealed two weaknesses the SPD has in recruiting due to the small size of the Town. The Chief referred to a past candidate who withdrew after learning that new officers start off with night shifts and advancement opportunities are slow.

Paulhus asserted, “nothing is more important than [training]. We follow a concept that every day is training day.” He explained that the state requires 40 hours of in-person training, plus 16 optional hours each year. There are also annual training standards they adhere to as part of the department’s accreditation. Weekly training is shared through a module. And each officer must be trained by an instructor each year on every tool/weapon they use.

The SPD budget includes $10K for training, which they use to send officers to optional training. (One recent topic was deescalation.) Prior to Covid, the department had just begun leveraging its new facility. Professional training services would use their training room as the venue in exchange for SPD officers participating for free. That’s something they hope to be able to do again in the future.

Selectman Brian Shea pointed to officers’ need to very quickly make decisions on whether or not to use force, and what type of force to use. He stressed it was incumbent on the board to ensure the force gets proper training.

Chief Paulhus remarked that the biggest change he’s seen in his 30 year career was the tasking of police officers with handling people who are mentally ill. He pointed to a societal change years ago, with fewer “beds” for patients.

The SPD has benefitted from a Boro partnership sharing the services of a Clinician part time. Lt Newell explained that the Clinician is available when they handle “crisis calls”, and calls related to mentally ill people or substance abuse. She works to deescalate situations, and officers have learned from her example. She also is able to assess potentially suicidal patients in their cells.

The Clinician’s work includes jail diversion program. In an effort to avoid repeat police intervention, the SPD is also working to partner with Southborough Youth & Family Services for them to offer follow up support.

Reporting Use of Force and Complaints

As for use of force, the department has a 42 page policy. Recently, the SPD determined that the policy language was too weak in one area. They revised the policy on officers’ duty to intervene if they see another officer mishandling a situation. Paulhus credited the police union with being on board with making sure they’re abiding by best professional standards.

Selectman Lisa Braccio expressed appreciation for Paulhus leadership and training. She referred to the SPD’s restraint in handling of a violent incident this summer in which a Sergeant was attacked.

According to Paulhus, when officers do use force, they have to file reports to be signed off on by a supervisor then the Chief or Lt. He characterized the number of incidents per year as very low.

Healey asked for the SPD to submit a report on use of force and lodged complaints to selectmen at least every 6 months. He said that would allow them to see if there were any “spikes” or incidents they wanted to follow up on. Paulhus agreed.

On Facebook, the SPD reminded residents of their drop off box in their lobby for leftover prescription drugs: 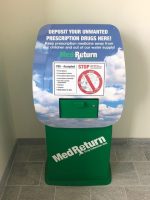 Old prescriptions left unsecured in the home can often be an easy source for someone thinking about abusing prescription medications, and can pose a danger to pets or children who may accidentally ingest them. They can also be confusing for elderly people who may have multiple prescriptions.

Throwing old pills in the trash is often not the safest way to dispose of old medication, and flushing medications may contaminate the water supply.

The Prescription Drug Drop Box is a safe way to dispose of unwanted, unused, and/or expired prescription drugs.

The Prescription Drug Drop Box is open 24 hours a day.

The SPD is promoting its annual awareness and fundraising campaign for the fight against Breast Cancer.

The Southborough Police Department, in conjunction with MassCop Local #167, is proud to announce our participation in the Pink Patch Project again this year. The Pink Patch Project is a collaborative awareness campaign between many police departments throughout the country. The goal is to help raise money and bring awareness to the fight against breast cancer and to support breast cancer research.

It is estimated that approximately one in eight women will be diagnosed with breast cancer in her lifetime. This disease can have a profound impact on the patient and her loved ones. It is a disease, however, that can be effectively treated with surgery, radiation therapy, hormone therapy, and chemotherapy.

Throughout the month of October, those living in and traveling through town will notice that members of the SPD will be replacing their normal police patches on their uniforms with a new pink version of the patch. This will be done to support those fighting and researching the disease, as well as honoring the memory of those who have lost the battle.

Those same pink patches will also be available for sale for the months of September through October, for $10 each. ALL the proceeds from the sales will be donated to the Dana Farber Cancer Institute. Those interested in purchasing a patch, can mail a check to the station with your name and address included.

*Please make sure that “Attn: Pink Patch Project” is on the outside of the envelope.
We will then mail back a patch or patches OR we will drop of your patch (or patches) in your mailbox.
We hope that you will join us in supporting this great cause!

Above right, I included an image posted in a previous year showing an example of a the pink patch.

Since my last log posting, the SPD has shared on Facebook logs from July 27th – October 5th. Given the length, I’m again attaching my reformatted list as a pdf.

The reports include 13 listed* arrests made, most related to alleged driving under the influence. Two more “Criminal Applications” were pressed against drivers. 47 car accidents were reported, 6 requiring transports to the hospital.

The logs include crimes previously reported by the SPD include the spree of thefts from cars in early September and an August break-in for which charges are being pressed. 43 additional reports were taken of larceny, forgery, and/or fraud. Four harassment complaints were also lodged.