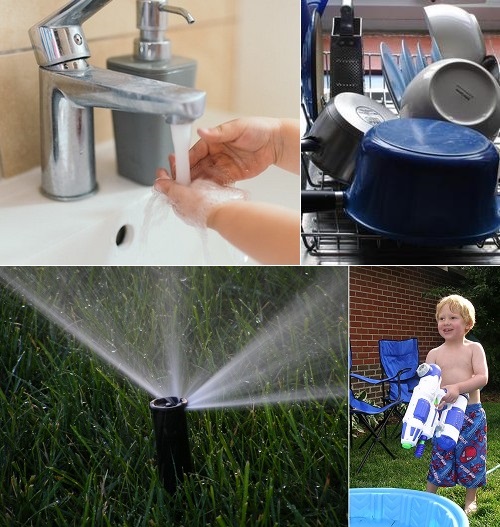 Above: Some of the things residents did more of this year, helping to drive up their water bills. (images clockwise from pics posted to flickr by Nenad Stojkovic – cropped, Ben Weiner Michael Mol, and micha hanson – cropped)

Back in February, I warned readers they might want to reassess their water usage based on a revised water supply rate plan. It now looks like some big water bills from last quarter have triggered questions and complaints.

In her presentation, Public Works Superintendent Karen Galligan had explained that the rate changes would be a big % hike for some but “dollarwise” not that bad. Additionally, the rates were targeted at keeping the numbers low for households with low water usage.

As I noted at the time, July bills would be based on rates changes as of the quarter starting in March. Unfortunately, the increase coincided with a pandemic that suddenly had people spending more time at home.

It looks like usage was an even bigger issue when the warmer weather hit. Many people were still working from home. And over the summer, families were often entertaining kids at home rather than sending them to camps or going on vacations. Dry conditions also had people doing more watering. (And given the media attention to gardening this spring for people getting stir crazy, I wonder how much gardening increased in town.)

The Town posted an explanation to the Town’s website. It explains that last quarter:

The high usage is likely from the combination of the very dry, hot summer (drought conditions), and people being home because of the pandemic. Watering potted plants and even small sections of new lawns use a lot of water, especially if the outside spigot is not closed tightly. Also, filling kiddie pools, water balloons and super soakers, especially if there is a leaky hose, or hose connections, increases use. Families that were home instead of at work, using bathrooms, making ice, drinking water, and making water-based drinks, as well as making lunch, adds water to their home usage even with these slight changes to daily usage/habits. . .

Unfortunately, we had the perfect storm of issues this year – a drought and people at home for 3 to 6 months. In short, the higher than normal usage was compounded by the water rate increase.

The letter also outlines the revised water rates (and reasons) and the billing cycle. Plus, it provides a tip on how to check if you have a leak adding to your water bill woes. The letter notes:

Running toilets, leaks in hose bibs, leaks in irrigation piping, and leaky faucets can greatly contribute to a home’s water use. A property owner in Natick just received a $15,000 water/sewer bill for a multi-family property that was the result of a toilet that wouldn’t stop running.

You can find the full letter here.