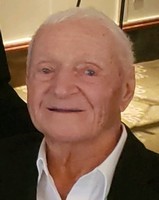 Redio A. Bartolini, 96, lifelong resident of Southborough, passed away on Monday, November 23, 2020 after a short period of declining health.

Born in Southborough, he was the son of the late Antonio and Maria (Cusiani) Bartolini, and is the last Bartolini family member of his generation.

Redio was a graduate of the former Peter’s High School of Southborough and a World War II Marine Veteran. He worked for many years as a millwright at the General Motors Assembly Plant in Framingham as a member of the New England Carpenters Union.

Redio enjoyed hunting with his family in the woods of New York, fishing and making wine years ago with his childhood lifelong friend, Gino Tebaldi. He also had a passion for horse racing and was an ownership partner in All World, a Championship Trotter in the late 70’s and early 80’s.

He is survived by his longtime companion Connie Green, his sisters in law, Marguerite “Peggy” Bartolini; and Kathleen Bartolini both of Southborough; and 3 generations of nieces and nephews.

In addition to his parents he was predeceased by his sister, Lena Rossi; and his brothers, John, Leo, and Louis.

Due to the Covid-19 pandemic all services will be private. He will be buried in the Southborough Rural Cemetery.

In lieu of flower memorial contributions may be made in his memory to the American Legion, Post 161, Att; Dan Kolenda, 7 Blendon Woods Drive, Southborough., MA 01772

Arrangements are under the care of the Morris Funeral Home, 40 Main Street, Southborough. To leave words of condolence to the family, please visit www.morrisSouthboroughfuneral.com.

Redio was the consummate gentleman! He befriended my dad, way back when at the Fayville AA. My Dad was a bar-tender there.. They played cribbage – fiercely! They also both shared a passion for harness horses, esp trotters! My dad and Redio dickered about them while I adopted a young trotter from Redio’s friend, Peter Park. Her name was Super Tuesday. My dad passed and Redio was sympathetic for me and became my friend, replacing my dad. He would come by the stable and give me tips about my trotter. Later he would come by with gifts of veggies from his garden. He was ever the white-haired gentleman! Caring, kind and giving! I will ever think of him and my Dad as the “old” kind of caring human beings! Rest in peace, dear Redio! You were a Southborough institution! Love you!