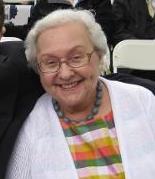 Nancy (DeLucia) Powers, 89, of Falmouth and formerly of Southborough died on Friday December 4, 2020 at Falmouth Hospital after a period of declining health. She was the beloved wife of James J. Powers who died in 1999.

Born in Wallingford, Connecticut to Jack and Barbara DeLucia, she spent her considerably happy childhood there among a large extended family with many cousins. Those “many” cousins kept a life-long routine of annual get togethers denoted as “Cousins’ Weekends”. Upon graduating from Lyman Hall High School, Nancy matriculated to the St. Francis School of Nursing in Hartford, CT. She began her lifelong career in nursing, particularly industrial nursing, with a position at Pratt and Whitney.

Within a year of her graduation with a nursing degree, Nancy met the love of her life, James J. Powers. They married in October 1953 and moved to Massachusetts. She worked at Lawrence General Hospital through the arrival of their daughters, Kathleen and Barbara. Shortly after Barbara’s birth the family moved to Southborough where Nancy lived for over fifty years.

Nancy and Jim loved their neighborhood and settled into a rhythm with family and close friends at the center of their lives. They enjoyed gatherings with relatives and friends in the summer at shoreline retreats whether the lakes in New Hampshire, Northern Connecticut or the beaches throughout Cape Cod. When their daughters were young adults they expanded their geography to include Caribbean Islands and were particularly fond of Aruba which they visited annually for many years. When their daughter Kathy and her husband lived in Ascot, England with their first grandchild they embarked on an extended visit and adventure to the UK which included touring the English countryside, Lake District and Scotland.

Nancy continued her nursing career at Framingham Union Hospital while raising her two girls. Once the girls entered elementary school she resumed her industrial nursing career at General Electric, followed by RCA and then spent over twenty years at Data General Corporation as Head of Medical Services. She enjoyed the responsibility, she was well loved by the employees she served and was a wonderful role model to her daughters.

Nancy was known for her kind heart and warm sense of humor. She was very social and had a large group of “girlfriends” who frequently gathered over dinners, to play bridge or numerous other card and board games. She was devoted to Jim and her family. She cherished the time spent with her daughters, grandchildren, nephews and nieces and especially her sister Jacquelyn. Nancy will be missed by all she loved in her life.

She is survived by her daughter, Kathleen P. Haley and her husband Steven R. Haley of Lewisville, North Carolina; her grandchildren, Matthew J. Haley and Christopher S. Haley both of Boston; and Courtney J. Haley and fiancée Zachary Barnes of Winston-Salem, NC; her sister and best friend, Jacquelyn Beale of Meriden, CT; her nephews and niece, Robert Beale, Christopher Beale, and Ann Furgalak of CT.

In addition to her husband, she is predeceased by her daughter Barbara J. Powers.

Visiting hours will be held on Thursday, December 10, from 9 to 10:30 am at the Morris Funeral Home, 40 Main Street, Souhborough followed by a funeral Mass at 11 am at St Anne Church, 20 Boston Road, Southborough. Burial will be in the Southborough Rural Cemetery.

Memorial contributions may be sent in her memory to St Anne Church, 40 Main Street, Southborough, MA 01772

To leave words of condolence to her family, please visit www.morrisSouthboroughfuneral.com.