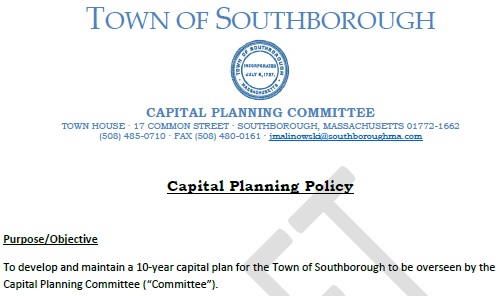 Above: Selectmen supported a draft policy to create a consistent framework for vetting and prioritizing capital expenses before Town Meeting voters are asked to vote on them. It’s a policy they’ll be bringing to the next Town Meeting. (image cropped from BOS packet)

This week, Southborough’s Board of Selectmen voted to support a new policy to consistently vet Capital expenses before they are proposed to voters. At the next Annual Town Meeting, voters will be asked to adopt a standing committee to oversee the policy (and likely the policy itself).

review and evaluation of capital items and projects contained within the Town’s Capital Plan, and developing strategies to move these projects forward for approval in a financially responsible manner.

Since April, the busy committee has met 25 times to discuss short and long term capital needs and requests. This fall, the committee began work on developing a policy to formalize a consistent process.

On Tuesday night, Committee Chair Jason Malinowski explained they want to ensure that capital expenses are well vetted as needs – not just items that a department head or board say they want.

So what is a Capital Expense versus other expenses in the Town’s Budget? The draft policy defines:

A capital item is a tangible asset or project estimated to cost over $10,000 (“capital threshold”) and estimated to have, or to extend, three or more years of useful life.

Bulk purchases of similar items, like software or furniture, with expected useful lifespans of three or more years that, when aggregated, have total costs exceeding the capital threshold.

To develop and maintain a 10-year capital plan for the Town of Southborough to be overseen by the Capital Planning Committee (“Committee”).

Malinowski described the draft policy as a framework to create consistency for investing in those expenses, regardless of their funding source. The policy calls for all items that fit the Capital Expense definitions to follow the outlined policies and process.

Funding guideline highlights (in my words) include:

To read the full definition and set of guidelines, along with the outlined process, guidelines for prioritizing projects, and other details, click here.

To create the draft, the Committee looked at policies from other towns and considered how Southborough’s needs are similar and different. The Committee also incorporated learnings from their experience over the past 9 months. And, Malinowski referred to Treasurer Brian Ballantine’s help as invaluable. He said that Ballantine helped them “avoid mousetraps”.

In Tuesday night’s discussion, Malinowski indicated that the Committee intended to ask ATM voters to approve a policy. He was asking for the Board’s approval or feedback on their draft. Selectmen said they didn’t see any holes or issues, though they acknowledged they may discover some after a couple of “cycles”. If so, they could work to amend the policy. They approved the draft without edits.

The concept was previewed at the Board’s October 27th meeting. At that time, BOS Chair Marty Healey advocated for converting the Capital Committee from ad-hoc to a permanent one. A placeholder was since added to the Warrant for the next Annual Town Meeting.*

Advisory members are only allowed to serve on one ad hoc committee or one other committee that is appointed by the Town Moderator (as Advisory is), with some restrictions.

Advisory is charged with reporting to Town Meeting voters on Town finances and making recommendations on spending requests. The Committee had advocated last spring for the re-creation of a special committee dedicated to digging deeper into capital expenses in the pipeline. Three members currently serve on both committees.

Advisory is working on revising its bylaw to allow serving on both committees to continue. In December, former Advisory member John Butler explained that the bylaw restriction had been added years back after other standing committees started recruiting Advisory members. The concern was committees seeking to have an advocate on Advisory. Given the focus of the Capital Planning Committee and Advisory, he opined that in this case serving on both isn’t a conflict. He advised rewriting the bylaw to make an exception.

Note: Reminder –the Capital Planning Committee announced that it is seeking at least one new member. Click here for the details.

*ATM is currently scheduled for March 21st. This week, selectmen and Moderator Paul Cimino agreed that’s unlikely to happen since a March meeting would need to be held indoors. They agreed to look into the status of requirements for rescheduling this year’s Town Meeting for discussion at the next BOS meeting.

**It’s interesting to note that Healey is one of four selectmen who previously served on Advisory. The only selectman who hasn’t, Lisa Braccio, is a member of the Capital Planning Committee.