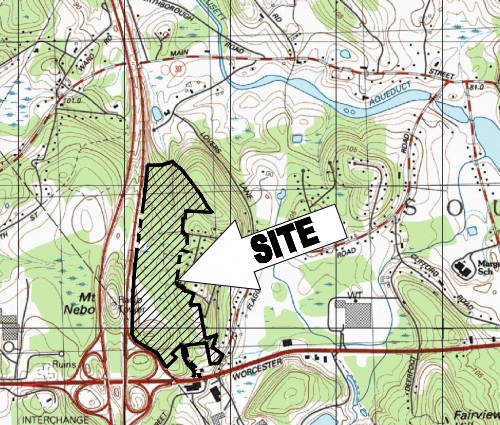 Above: An update on the Park Central trial in progress. (image cropped from January 2020 project plans)

This week, the bench trial opened for an appeal of the approval for the controversial 40B project at Park Central in Southborough.

The trial focuses on Southborough Zoning Board of Appeal’s 2016 granting of a comprehensive permit for the project. The complaint is lodged against board members in their capacity and the developer.

Opening arguments began on Wednesday morning. Attorney Angelo Catanzaro represented developer William Depietri and Park Central LLC. He noted that of the 21 original plaintiffs he believed there were 8 remaining.

Catanzaro stressed that only persons aggrieved by a project are considered to have standing to appeal. He defined that they must be “truly and measurably harmed by the decision the board rendered”. Catanzaro stated their intent to rebut claims of increased traffic dangers creating measurable harm.

Referring to abutters’ locations and the direction of traffic to and from the proposed development, Dan Pasquarello said that if his clients didn’t have standing no one would.

Pasquarello accused the ZBA of ignoring a slew of unresolved issues to barrel ahead with a decision on the same day that one of the three ruling members sold his house. [Then-member David Eagle moved out of Southborough, making him ineligible to continue to serve.]

Town Counsel Aldo Cipriano rebutted that the board acted properly following 30 months of review when 6 months is the recommended standard. He claimed that any outstanding issues were covered by 105 conditions included in the decision.

The first two provided background and history of the complicated relationship between the 40B project and a previously approved market rate project.

Marchant is an expert on 40B housing projects in Massachusetts. He had worked for the ZBA to advise them on the process. As part of that role, he helped to mediate an agreement between the developer and several abutters in the Bantry Road/Tara Road neighborhood. (Those abutters aren’t among the plaintiffs in the suit.)

According to plaintiff counsel Ginny Kremer, the defendants had filed intent to also use Marchant as an expert on the legality of the project. Judge William Ritter agreed with her that it would be inappropriate. At one point during cross-examination, Ritter warned that Kremer her questions could open a door for the defense. He clarified that there was a difference between Marchant explaining standard 40B procedures and discussing the legality or propriety of how the specific case was handled. Kremer backed away from her line of query.

In Galligan’s testimony she indicated that in 2016 or 2017 she had determined that Flagg Road could be widened. Kremer asked her about a 2013 memo in which she informed selectmen that widening the road had been studied several times and considered not feasible. She explained that was before a number of trees died. Once she considered it a viable option to remove trees, she realized widening the road was possible.

There is a break in the proceedings until the morning of February 1st. The trial is scheduled to continue to February 2nd and again on February 8th and 10th. The public can continue viewing the trial over zoom.

Plaintiffs in the case had asked for the trial to be postponed until in-person attendance was possible. Ritter stated that the defendants were entitled to a speedy trial and this was an example of a case that was appropriate for the format.

The zoom format did cause some hiccups, but so far nothing that appeared major. Judge Ritter had to occasionally remind non-attorneys who called in to mute themselves. Incidents with screen sharing or audio difficulties briefly held up proceedings at times. Ritter continually encouraged participants to take their time. At several points, he sought feedback from attorneys on whether they had any impediments.

Prior to witness’ testimony, Ritter questioned them on where they were and who they were with. He reminded each to treat their testimony as if they were on the stand. He clarified that they could not seek or receive outside assistance or communications. They could only look at what was on the screen or refer to specific exhibits as directed by attorneys questioning them.

On February 1st, the defense is scheduled to continue questioning an engineer who worked on the defendant’s traffic study. The plaintiffs case could begin as soon as that afternoon. Included on their witness list to examine are the three ZBA members who voted to approve the permit.

Beth, you forgot to mention the letter sent to Planning Board that was signed “EM” and Ed Marchant (ZBA 40b advisor) said he never wrote. Was this letter a forgery? The letter was put on screen as an exhibit and was riddled with legal conclusion (Marchant isn’t an attorney) and what appeared to be threatening language. Then a second letter was posted on the screen on the developer’s attorney’s letterhead. It was written by Catanzaro. (See the Mass Board of Overseers website for the Public Admonishment under his name.). It contained much of the same language. Can you provide dates and some mention, clarifying details? Thanks

I am not aware of the documents or testimony you are referring to. (Unfortunately, I wasn’t able to zoom in to every minute of the testimony and some of the times I did have it open on zoom I had to step away or deal with other matters.)

Further, I should say that I have no intent in trying to recap all of the issues covered in the trial. (There were two days of testimony, and I’m sure someone on the defense side would also say, “you forgot to mention….”)

No worries. Thank you for all the good articles. Perhaps someone who knows or saw that part can help shed light on further details. Mr. Marchant seemed shocked and stated that he did not write the letter with his initials “EM.” The second letter on Attorney Catanzaro’s letterhead, signed by Catanzaro, the developer’s attorney, was even more shocking. If Mr. Marchant did not write the letter, is this forgery? Is forgery a felony? Can someone who knows shed light? Thanks

In spite of a few advantages, one of the main obvious objections and serious disadvantages to Zoom is the fact that there is no way to confirm if a witness is actually being coached or not offscreen, and is referring to notes or not. Just one opinion, but a few defendants’ witnesses certainly sounded like their narrative testimony was being read or taken from notes. Also, difficult to show faces and credibility or non credibility. The Zoom screen is chaotic and distracting. Hard to see any gulping for possible perjury, lying, being caught in lies, or breaking laws and being called out for same. Also, showing exhibits. The court room is the best forum for those serious considerations in delivering justice. One of the most common disadvantages written about in the press is coaching off camera. No way at all to verify what is actually happening.

0
Zen and the Art of Testilying

In the original article above, it states:

Town Counsel Aldo Cipriano rebutted that the board acted properly following 30 months
of review when 6 months is the recommended standard. He claimed that any
outstanding issues were covered by 105 conditions included in the decision.

What is the Town’s position on Park Central? I keep reading about residents who are in opposition to the development, yet Town counsel seems to consistently present arguments in support of Park Central.

People keep calling for Cipriano’s resignation and/or replacement, yet he persists in the role.

Town Counsel is defending the Zoning Board of Appeals in this case.

The ‘SITE’ arrow obscures an important stretch of impacted Flagg Road and its intersection with Lovers Lane. How did the humongous arrow come to land here?

The image (including the arrow) was cropped from the January 2020 plans submitted to the Conservation Commission for their hearings. (The Commission’s hearings were about issues related to stormwater drainage, wetlands, etc.)

I simply shared the image to give context to readers who haven’t been following the story closely a reminder of where the project is. To me it seems fairly obvious that the roads shown there connect. There was no intent on my part to obscure that.

Beth, I surely didn’t expect the arrow was your work. The traffic situation is a very big part of this entire affair and covering that section on the map, to me, looked like someone putting a finger on the scale.

Beth, the article above cites further dates of Feb 1, 2, 8, and 10. Are these hearings using the same Zoom link provided above? Thanks

I believe so. The link worked for both days last time and when I tried it late on Thursday (and again just now) – instead of saying the meeting is over, it says the meeting hasn’t started yet. That seems to indicate it is still an active reservation.

I got confirmation that the zoom link is the same.

I have been trying to keep up with the trial and invite other residents to as well.
The trial is set to continue on Feb 18th and the 25th. So far the zoom link has remained the same.

I’m told that it is also resuming tomorrow, February 10th with plaintiffs presenting their case.

I just learned that the 10th was postponed – and you are correct about the 18th and 25th. Thank you.

Not easy, has numerous technical difficulties, and often just shuts down and stops recording, halting the proceedings. Catching every third word during key testimony. At times, does not allow attendees in.

PS — The cat is filling in and available for anyone who goes missing or is out-of-state.