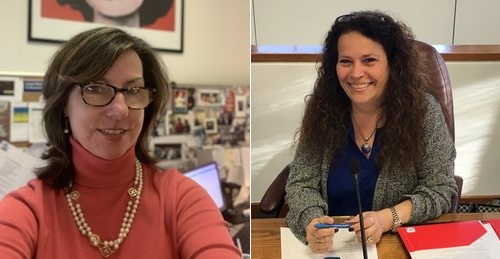 Two women in Southborough’s Town Government deserve a shout out for recent recognitions.

A month ago, Assistant Town Administrator Vanessa Hale was named the national winner of a special “Trailblazer” award. Not to be confused with the Town’s active senior group, this award by The League of Women in Government (LWG) and National Research Center, Inc. (NRC) “recognizes an accomplished leader in local government who has championed and inspired other women to achieve as well.”

This summer, LWG and NRC opened the call for nominations for the 2020 award. According to the LWG website, nominations were submitted primarily by local government professionals. A panel of judges from both groups reveiwed each nomination to select the top ten finalists. They announce Hale as the winner in late December.

Prior to working for Southborough, Hale worked in administrative roles for the Towns of Northborough and Sherborn. She also worked for the Mass Municipal Association and League of Women Voters. In 2003, she earned her Masters in Public Administration from Clark University.

In a Q&A style interview published by the league, Hale spoke about the honor and her experiences. She noted that entering the field was “completely happenstance due to a summer job in my hometown”. She called it a fortuitous match:

In my opinion, women who choose to work as a department head or an Assistant Manager do so not because they are afraid of being the leader of the organization, but because they want to focus on being a “helper” to paraphrase Mr. Rogers. Helping to develop the skillset that leadership requires within the organization has been a cherished role for me.

Asked her advice for other young women looking to be an executive in local government someday, she answered:

Without a doubt, my three tenets are: find a coach that you respect and more importantly enjoy; volunteer on a board, community project, or local non-profit related to your area of interest and, more than anything, choose an area that makes your heart and mind soar. I think my volunteerism activities and internships helped advance my career more than the two graduate degrees I have earned, though they were essential in actually being appointed to the jobs I have held. The author Gretchen Rubin advises women to network with females you admire, through e-mail, coffee dates or informational meetings, and any networking setting you can imagine. This is sage advice that I have tried to offer women less experienced than me.

You can read the full interview here.

Braccio was just named the Worcester County District Representative for the Massachusetts Select Board Association. She represents all of the 55 member Towns in Worcester County.* She will serve on the Executive Board, comprised of 9 members. They collectively represent the close to 1,200 selectmen serving 292 towns.

The MSA provides opportunities for these town policy makers to network and share ideas, pursue educational opportunities, meet with state leaders and subject-matter experts, and participate in the advocacy work of the MMA.

We’re so excited to announce Selectman Lisa Braccio @ladylisa1966 was appointed to the Mass. Selectmen’s Association Board of Directors! Her dedication to a broad range of community services for all & passion for local government will shine through immediately. @massmunicipal

*Updated (1/28/20 8:23 am): Braccio confirmed for me the number of member towns in her district. (There are 55. Our county also includes 5 cities that aren’t members as they are run by mayors/city councils.) She also clarified the process for her election to the position. It looks like there’s a nice tie back to the first story, Hale’s work supporting females in Town Government:

The MSA sent out a request for nominations for District 5, which Asst Town Administrator Vanessa Hale brought to my attention. There was an interview process for those who applied by a Committee made up of members of the Executive Board. They brought forth their nominations to the annual January meeting and a vote was taken by members present. And thankfully I was appointed. I am very excited for the opportunity to represent my fellow Selectmen/Select Board members in bringing concerns/items forward to our monthly meetings on their behalf. I am hopeful that I can coordinate some form of monthly meeting with members of District 5 as well to keep everyone updated and best informed.

Congratulations to both of you! You make this town and community better every day with the work you do.