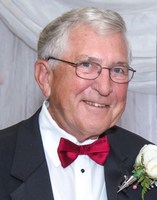 Jim was born on December 18, 1940 in Akron, OH, the son of Ruth Ross (Gray) and James N. Ross. At the young age of eight, Jimmy knew he wanted to be a veterinarian and eventually achieved his dream in 1965 when he received his Doctor of Veterinary Medicine from The Ohio State University. He continued at OSU finishing an M.S. in Veterinary Physiology and Pharmacology and in 1972 completed his Ph.D. in Physiology at Baylor College of Medicine in Houston, TX. Before that, Jim graduated from Norwalk High School in Norwalk, OH, as valedictorian of his class and then attended DePauw University where he was a member of the Phi Gamma Delta (“Fiji”) fraternity as well as the football and wrestling teams.

Jim met his first wife of 50 years, Marcia Collins, on a trip abroad during their junior year at DePauw. They were married in 1964 and together raised their three daughters in Ohio, Texas and Massachusetts. After finishing at OSU, Jim and his family moved to Houston where he specialized in veterinary cardiology working with human artificial heart pioneers, Dr. Michael DeBakey and Dr. Denton Cooley at Baylor. After seven years, the family moved back to Ohio where Jim was Associate Professor of Physiology at the Medical College of Ohio at Toledo and in 1981 he became Professor and Chairman of the Department of Medicine at the newly started Cummings School of Veterinary Medicine at Tufts University. Jim was one of the “founding fathers” of the school and was instrumental in helping build the institution eventually retiring as Distinguished Professor Emeritus. Throughout his career, Jim was a member of many veterinary organizations, receiving recognition in countless ways including the Massachusetts Veterinary Medical Association’s (MVMA) Distinguished Service Award in 1997. He also had the honor of serving as the MVMA president in 2005.

While at Tufts, Jim started a feral cat project on the Caribbean island of Virgin Gorda which lasted over 15 years. Known affectionately on the island as “Da Cat Man”, Jim began The Annual Feline Spay and Neuter Program after learning the cats were over populating the island and frustrated people were harming the animals in an effort to diminish the population. The project was extremely popular with nearly all 80 vet students applying, so the fortunate five had to be selected by lottery. His creative thinking had positive results as it helped his students learn, assisted the residents of the island, and ensured the cats’ healthy survival, all while doing it in a beautiful setting with time for some R&R as well! This project was just one of the many times Jim’s motto of working hard and playing hard was realized.

Despite his amazing career and many accomplishments as an outstanding educator, Jim was truly a down-to-earth fun-loving person having numerous life-long friends and colleagues around the globe. His love of animals was only surpassed by his love of people. One would often find Jim with a smile on his face and a twinkle in his eye. Always ready for a debate and frequently encouraging one, Jim relished interacting with others. When asked a question, he would usually thoughtfully answer with, “well, that depends” and then explain the different ways of considering an issue. He especially enjoyed listening and telling stories while out on his fishing boat. These excursions were always quite adventurous and often led to even more story telling! His family has fond memories of these discussions along with family vacations and of course, cheering on the OSU Buckeyes.

Later in life, after Marcia passed away, Jim was fortunate to meet Tanya Nguyen whom he married in 2017. The two happily spent the last few years traveling, visiting with family and friends (including many recent reunions with his fraternity brothers on Marco Island), playing cards, and laughing.

Jim’s memory will be cherished forever by his wife Tanya, daughters, Stephanie Harris and her husband, George, of Southborough, MA, Amy Tobin and her husband, Mike of Hicksville, OH, Lisa Ross and her partner Stan Self of Siler City, NC, his five beloved grandchildren, Joseph and Matthew Tobin, Hannah and Connor Redding, and Jackson Harris, as well as three nephews, John Rinehart, Bruce and Chris Bahnsen, many cousins, three grandnephews and two grandnieces.

Jim was preceded in death by his parents, first wife, Marcia, and sister, Jennifer Rinehart. A celebration of life memorial service, including a virtual component, will be held during the summer in the Boston area. Friends and family may leave comments, memories and photographs at https://obituaries.neptunesociety.com/obituaries/fort-myers-fl/james-ross-10077301 Memorial donations may be made to the Veterinary Scholarship Trust of New England at http://veterinaryscholarshiptrust.org/donate or the Veterinary Emergency and Critical Care Foundation at https://veccf.org/.

(Obituary and photo via Neptune Society)