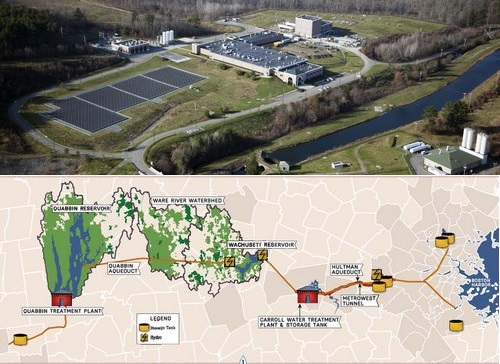 Above: The MWRA reservoir supply and water treatment facility serve the Boston area and several suburbs. It turns out that when Boston’s use plummets, costs for other Towns in the system—including Southborough—spike. (photo by Susan Fitzgerald)

Selectmen approved updated water rates for Southborough users last month. It increases charges by to bills for the next quarter – based on current usage. (The rates apply to water used following the meter readings in March.)

Obviously, the bad news is rates going up at all. The good news is that while it was described as a 5% increase, for many users, it will be less. (The increase only applies to the first 750 cubic feet of water used. From there, the rates for additional water usage were kept the same.)

The plan to increase rates by 5% this year were part of a strategy approved by the Board of Selectmen last spring. At that time, the water rate plan was revamped with recategorized tiers. Increased revenue was pitched as needed to offset the costs of bonds for water maintenance projects.

The tiers were redesigned for FY21 to keep rates low for residents who use the least water and for Southborough seniors. In turn, the presentation indicated that average households would see a 25% increase and the highest end users would see a bigger spike.

The concept was that property owners who use the most water are putting more of a burden on the system, driving the need for improvements. Therefore, those users should pay a higher portion of the costs. In practice last summer, the pandemic contributed to increasing some water bills even more than expected.

Last fall, the Town addressed complaints, explaining that spiked water use was behind most of the bill increases. As families stayed home, they used much more water for reasons ranging from washing more dishes to filling supersoaker water guns for kids who didn’t go to camp.

In reviewing rates for this year, selectmen learned that even the 5% increase won’t cover the increased costs the Town will see this year. Public Works Superintendent Karen Galligan told selectmen that the pandemic is causing the Town to shoulder a bigger share of the water supply costs this year than usual.

Galligan explained that Towns outside of Boston have a greater share of MWRA water costs due to much lower water use in Boston. Each quarter, the city is charged a usage fee. The other member towns then split the remaining infrastructure costs. With the Boston usage fee down, the burden of the fixed costs went up.

According to Galligan, for now the Town currently doesn’t need to raise the fees more than the planned 5%. Given the economic climate, she didn’t want to recommend a higher increase than was announced last year. There is  enough money in “retained earnings” to temporarily cover the shortfall.

Going forward, she is unsure how things will play out. There is uncertainty about how many workers will return full time to city offices.

Selectman Lisa Braccio worried about continuing to hit residents with increases on top of past increases. Chair Marty Healey mused that the increase to the municipal cost for water caused by the pandemic should be covered by the CARES Act. He hoped the Town would be able to seek federal relief.

Selectmen approved the 5% increase for FY22, with a caveat. They may revisit the amount after the next quarter rather than waiting until next year. (The implication was to possibly lower the rate. They didn’t appear to mean a possible additional hike.)

The new rates for this quarter are below: 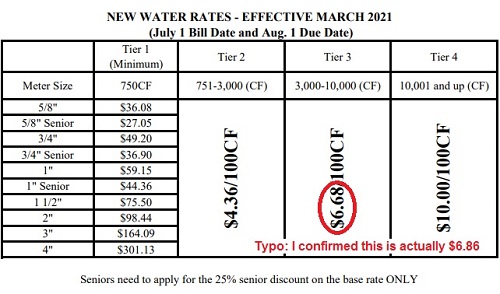 To read more about the Town’s water infrastructure costs and the analysis done, click here for materials from the Board of Selectmen’s March 16th packet.

Updated (4/7/21 7:29 am): You can find the Town’s water rates and, more importantly, the application for a senior discount here.

How do seniors sign up for the 25% discount that was seen at the bottom of the rate schedule? It is not mentioned in the article…unless my old eyes didn’t see it…

Thanks for the question. I forgot to include a link. You can find that on this page of the Town’s website.

Interesting to note: the senior discount was voted on and approved on November 14 1990…31 years ago! This is the first I’ve heard of it. I wonder how many other senior citizens are not aware of this?

I don’t know. The Water Bills don’t indicate how to apply for the discount, but they do include a rate chart with the discount listed and the text “Seniors receive a 25% senior discount on the base rate ONLY”.

LOL! I never noticed that! I guess I’ve just always paid it and didn’t read all the fine print…thanks, Beth! And as a two-year-young senior citizen, haven’t really paid attention to all the benefits that accords someone of that age, what with the pandemic and all…hasn’t really been very necessary this past year :-(

The water bills should say “seniors recieve a 25% discount IF they’re informed enough to know a discount is available AND they figure out how to apply for it”.
Too bad the Town doesn’t simply apply it.. I’m sure they have access to DOB’s thru other data sources at their disposal. Otherwise seniors DON’T receive it..orrrr could it be retroactive????? LOL

and to Just Wondering… be sure to let them know your age when applying for Transfer Station sticker.

There’s also a way for seniors to work off a portion of their Property Tax bill. I’m not sure of the process but I think (qualifying?) seniors are allowed to work a certain number of hours for the town at a rate that is then applied to their Prop Tax bill.

Those are the benefits I’m aware of.

In normal years, there is a Senior Tax Work Off program. Due to Covid restrictions, that was indefinitely postponed last spring. In February, the Town announced that applications were being accepted for Tax Relief. Those closed in February.

When things return to “normal” and the Town can safely welcome in more office workers, I’m sure they will relaunch the annual Tax Work Off program. The best source for seniors to learn about special programs and discounts for seniors in town is usually through the Southborough Senior Center’s newsletter. You can find a link on their website: http://southboroughseniors.com/index.html

Thanks, southsider :-) I was aware of the transfer station sticker discount and did do that last year. And the Tax Work Off program, as well. Just the water discount got by me…and I am not aware of any other discounts.

I agree that it would be nice if the discount was automatically applied. In the computer age, it would not be a difficult thing to do from data they already have. Maybe in the future sometime soon?

To apply for the senior discount you can get an application from Jean at the DPW.

Thanks! I found the form on the town website DPW page by using the link that Beth supplied above :-)

The town collector is not able to apply the discount so YOU need to contact DPW who will send you a an application. DPW requires you to provide proof of age despite the fact the town knows how old you are.