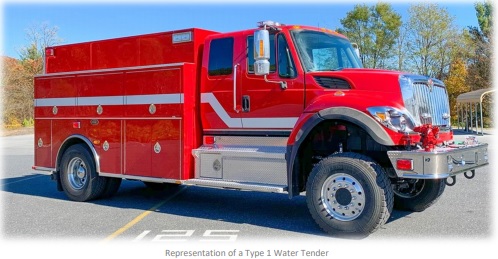 Above: At Annual Town Meeting this month, voters will be asked to fund a special truck for the Southborough Fire Department. The Chief asked if I could share information with readers on why they are seeking the new equipment. (image cropped from flyer)

With Annual Town Meeting approaching, another official who will be looking for voter support is reaching out.

Under Article 11 (Capital Expenses that require borrowing), the Southborough Fire Department is seeking $61,127 for “the first year amount” for a 2,000 gallon “Fire Tender”. Fire Chief Steven Achilles asked if I could share information on the request with readers.

[Editor’s Note: Thank you to commenter Phillip Robbins for noticing that the document refers to a price tag of $400K. (I should have known that $61K was too shockingly inexpensive for equipment like this!) Looking back at the Warrant, it states that the $61K is for the first year. It does also assure that the SFD is “seeking a grant for the acquisition of this asset.”]

Just last summer, the $600K request to fund a new pumper truck led to a long debate on the Town Meeting lawn. (The issue debated wasn’t the need for the equipment, rather whether it should be paid by voters or funding pursued through PILOT contributions from the private schools in town.)

Ultimately, the expense was approved. But given that debate, it’s no wonder that the Chief is looking to make sure voters understand why Town officials are pitching that an additional truck is needed.

A document supporting the “Water Tender (Tanker)” request explains that the truck is to support firefighting in areas of Town that are “off hydrant”.

Last fall, the SFD completed a Community Risk Assessment. Through that work, they identified that 15% of the Town is at high to significant risk due to lack of readily available water supply for fighting fires:

include residential neighborhoods in the northeast section of the town, forest and open lands around the Sudbury Reservoir, Interstates 495 and 90, and isolated areas within the current hydrant district. Factors considered that elevated the community risk in these locations include 1) the required fire flows, 2) access to occupancies, 3) lack of fire protection systems, 4) impact to life safety, 5) distance to available fire hydrants and static sources, and 6) the extended response time of available automatic and mutual aid water tenders.

The recommended solution is the tender with the about 2,000 gallon water tank.

I’m not overly familiar with fire truck terminology, and assume many readers aren’t as well. So, I reached out to Chief Achilles to find out more about the difference between the new pumper* and the tender.

He was able to point me to the Community Risk Assessment and Standard of Cover report. It lists the SFD’s inventory, and describes the pumper* as:

Fire apparatus with a permanently mounted fire pump of at least 750 gpm (3000 L/min) capacity, water tank, and hose body whose primary purpose is to combat structural and associated fires.

According to Achilles, it also carries ladders. At last year’s Town Meeting, former Selectman Bonnie Phaneuf told voters that the pumper truck isn’t just for fires. It carries members of the response teams to other incidents where the ambulance is called in.

Achilles explained to me that when the tender is needed, it would accompany the pumper. The pumper would be connected to the tender instead of to a hydrant, buying the SFD about 10 extra minutes until they can get more resources. Those other resources include mutual aid in the form of Hopkinton’s and Northborough’s tenders. (Achilles referrred to Hopkinton as closest and stated that depending on traffic, it can take that dept 10-20 minutes to reach a Southborough scene.)

The Chief noted that the tender would also be useful in some areas of town that aren’t considered off-hydrant.

A number of houses around Southborough have driveways so long that the SFD would likely use the tender for the initial water hookup. That would allow some firefighters to work on knocking down a fire while others worked on extending hoses to hydrants on the street.

*The new pumper hasn’t arrived yet. At last June’s Town Meeting, voters were informed that once the funding was approved, the SFD could order the vehicle. It would then take another 12-18 months to come in.

Updated (5/6/21 10:14 am): A commenter pointed me to errors in my post. I initially referred to the $61K funding request as the cost of the vehicle (and 1/10 the cost of the pumper approved last year). In fact, it is just the 1st year cost, with the full price tag of $400K.) I also was incorrect in referring to the engine pictured above right as the truck being replaced. It is the newer of the two pumpers in SFD’s fleet, purchased in 2017. The 22 old engine that is due to be replaced wasn’t pictured in the report.

The town needs this. There are many large homes that are outside the water district. This vehicle would provide extra water at a fire scene where hydrants aren’t available, or are a distance away. It would also be able to supply vehicles used for off road brush fires. I’m not a huge advocate of spending, but this has been a necessity for years.

You quote a price for this truck at $61,000, however, the fire department’s Facebook page shows a price tag of $400,000 fully equipped. I’m wondering where the 61K figure came from. Also, you show a picture of Engine 23 as the engine to be replaced by the truck which was approved at town meeting. Engine 23 is the newest truck. Engine 22 is the truck to be replaced. I am 100% in favor of the fire dept getting the tank truck. I’m also in favor of the town extending water service. My concern is that as the department has added needed equipment there has been no increase in staffing levels. Depending on off duty staff and mutual aid only compromises public safety.

Thank you for pointing out the price differential. I was very surprised at the low price tag. The price was what I took from the Warrant for Article 10. I’ll have to take a deeper look. (I’ll also look at the 22/23 detail you pointed out.)

I found the correct details and updated the post. Thank you for noticing and pointing out the errors.

Accepting that this is a need.

Do surrounding towns have tanker trucks that can be used when necessary?

Could this be a test case for deepening our mutual aid relationships and establishing a framework to share costs for equipment such as this?

There are other towns already providing mutual aid. But the belief is that it isn’t enough, especially with risk for 15% of the Town:

Achilles explained to me that when the tender is needed, it would accompany the pumper. The pumper would be connected to the tender instead of to a hydrant, buying the SFD about 10 extra minutes until they can get more resources. Those other resources include mutual aid in the form of Hopkinton’s and Northborough’s tenders. (Achilles referrred to Hopkinton as closest and stated that depending on traffic, it can take that dept 10-20 minutes to reach a Southborough scene.)