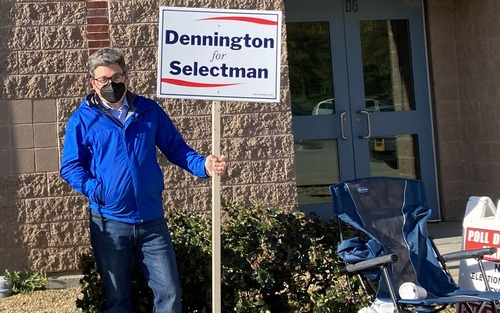 Above: Andrew Dennington successfully campaigned for a seat on the Board of Selectmen, winning by 27 votes. (photo by Beth Melo)

In the unofficial results from yesterday’s Town election, Andrew Dennington won his bid for the Board of Selectman with just over 50% of the votes.

In the combined results from Southborough and Northborough, it looks like the current Northborough representatives on the Regional School Committee are keeping their seats. (Although, I’m more certain about one than the other.)

The tally from the Southborough Town Clerk’s office shows that Dennington received 461 votes vs Michael Weishan’s 434. (Another 13 voters didn’t select either candidate.)

[Editor’s Note: The details on the race below are inaccurate. Scroll down for details.]*

Three candidates ran for the Regional School Committee’s two Northorough seats. Kathleen Howland was re-elected by a clear margin. Karen Ares (who was appointed last June) seems to have squeaked a win over Mariam Ibrahimi by 3 votes. Ibrahimi won more votes in Southborough, but voters in Northborough selected Ares by a larger margin.

Again, these are the “unofficial results” yet to be validated by the state. I haven’t seen an announcement about the school committee race and I’m not sure what the protocol is when the margin is that slim.

Below are the votes based on the results released by each town:

[Editor’s Note: This graph was incorrect. Scroll down for details.]*

Those were the only two contested races on the Southborough ballot.

In Southborough, only 908 voters participated in the election, 11.9% of registered voters. That’s up significantly from the election last June in which only 609 voters cast ballots. But it’s only 76% of the votes cast in the 2019 election.

I think its worth noting that this year (and last), Metrowest Daily News didn’t cover Southborough’s election. In prior years, they not only covered the race but shared candidates’ statements.

Updated (5/17/21 10:21) I apologize for the sloppy error. When I grabbed Northborough’s unofficial totals, I neglected to notice that the Southborough votes were already incorporated. Therefore, I double counted them. Though the elected representatives were correct, the figures and margins between candidates above were incorrect. For the correct, official results, click here.

Congrats to the winners ..and thanks to all who ran for offering your time and service to the town.

This race was too close. The original count in the BOS election shows a loss of one candidate to the other by 38 votes. Last night’s recount brought that number down to 27 votes. That’s a noteworthy difference off just the machine count. Since the town clerk took a trip to NH to learn about a 900 vote discrepancy for a BOS race there, for votes that did not belong to a candidate, it is worthwhile to learn about machine errors and take a manual count with onlookers and professionals from both sides. Thank you

Especially interesting is the difference by precinct. I’m not that knowledgeable on our towns demographics based on precinct, but just based on generic perceptions, I never would have thought it would vary so greatly.

Dear SB Resident: I haven’t seen the actual results, so I don’t know for fact, but it occurs to me that Precinct Two results might well have varied greatly from the others due to the presence of the Park Central project. All politics is local. In this case, VERY local!

I had guessed that’s what it would show. However, the unofficial results show Dennington won Precinct 1 & 2 and lost Precinct 3.

The Town Clerk’s office posted that the official results will be posted today. So, we’ll see what those say.

Congratulations to all that chose to run and give your time to make our Community better! I wanted to share complete gratitude, as a Mother, for being a part of such an amazing, supportive and caring Community. The kindness bestowed on my 19 year old son Robert yesterday at the Election, as he ran for Housing Authority, has truly shown him and our younger adults that age does not matter when you want to serve your Community. To everyone that took the time to check his box on the ballet, in an uncontested race, has humbled me to the core. The joy and pride he felt will be something he will carry forward with a new confidence to step outside his comfort zone, is beyond exceptional. Thank you from a grateful Mom.

SB Resident, the election results numbers were flipped and reported incorrectly. The precinct numbers were flipped in error. So it is difficult to understand exactly what happened. The voters need answers on counts by precinct and an explanation of errors. Is a manual recount underway? What about the lessons learned in NH by the town clerk on a faulty BOS election vote count there, roughly 900 votes? What is the accurate, verified election result? Can anyone please shed some light on all of this? Thank you

Sorry Manual, but since last November, no one cares if a machine count comes out differently when run twice. Since only 12% of the registered voters cared enough about the town election to actually vote, it would seem to me you have a long uphill climb. You would think that since “blanks” won the contest in Southborough for regional school committee some would come to the conclusion that something is not quite right.

The blanks that “won” were for the Northborough representative on the committee. Many Southborough voters may have felt that is a position the other town should decide. I wouldn’t conclude that means something isn’t right.

Although I don’t have his official statement yet, Michael Weishan confirmed to me that he already conceded the election to Andrew Dennington. He said that Town Clerk Jim Hegarty assured him that a recount wouldn’t find 27 more votes and that he trusts him “implicitly”.

Apparently one precinct was reported as another precinct’s numbers, in error. The numbers were mistakenly swapped. So if one candidate actually thought he lost in a certain district, he actually won? Someone responsible for the election should be able to explain this better. Please looking to understand what happened too. Can anyone explain? This is less about persons as it is about a process that needs accountability, verification, and accuracy in reporting. Whatever light someone can shed is appreciated. Is a manual recount underway? Thank you

Frank Crowell and all voters. I would encourage you to request a recount as a number of objective issues and problems need to be accounted for. This is not about persons or dispersions. This is about a process and appropriate verifications. Unfortunately apparently voters cannot request a recount. However, Mr. Dennington or Mr. Weishan may do so. Both candidates should reach out to the election people and ask for a recount on behalf of the process and the voters who are the town. Here’s why:
Apparently two of the precinct counts were transposed in error, whereby precincts two and three where switched and misreported.

More importantly, the 27 vote spread is apparently the lowest margin in town history. It equals roughly 3 percent of the total, which is a pretty thin margin. Contrast that to the apparent takeaways from the town clerks trip to NH, where reportedly 900 votes were attributed to the wrong BOS candidate, this leads to legitimate bases for double checking. Why have a cloud over such a close vote? Both candidates should be wanting the same goal legitimately on behalf of the voters they asked to stop their day and put them into office to represent the citizens. Both are good candidates. It’s not about persons and it’s not personal. Reportedly, Mr. Weishan is concerned that some could mischaracterize a recount request from just him as lacking graciousness. Sadly, maybe rightly so. That is a very thoughtful and appreciated interpretation. However, with all due respect, in the interest of accuracy, fairness to the town as a whole, and integrity of process, that’s what it’s all about. Perhaps the candidates can help clarify what happened and jointly make the recount request as the gentlemen they are on behalf of the town, given the very small margin. Thank you

PS—Frank, If the blanks won in the regional School Committee race, then yes, that is another reason to look again and do a recount. In the interest of accuracy, transparency, and integrity of process, it’s the right test of the system. Candidates, how about it? First test of leadership. Thank you