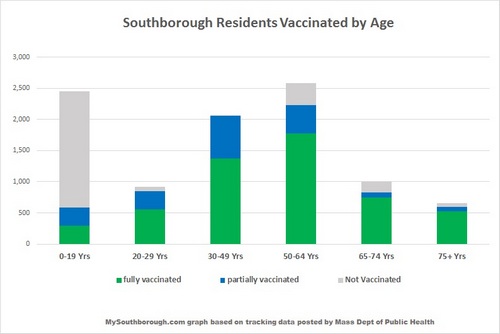 Above: Almost as many 30-49 year olds Southborough residents have received at least one shot of a Covid-19 vaccine as are listed in the state’s demographics count for the Town. (click to enlarge)

With 13 cases in two weeks, our risk classification was shifted to green/low risk. Looking at the Town’s data as of yesterday morning, there were only 5 cases confirmed in the prior 7 days.

The Town’s cumulative total over the course of the pandemic is 504 cases. The number of active cases dropped to only 4. It’s a big plunge from 39 just 3 days prior. It appears that is based on the Board of Health re-categorizing the data to be more accurate.

Prior to May 13th, Isolated cases included those patients who the Board of Health wasn’t able to confirm were cleared. Sometimes that was due to staff being unable to stay on top of it during case surges. Apparently, it also included patients who weren’t responding to communications efforts. Starting this Thursday, the BOH pulled them out to report separately as “Lost to Follow Up”.

For updated details on the Town’s reporting of cases and demographics, click on graphs below.

The state lists our Average Daily Incidence Rate per 100,000 as 9.6 (lower than prior period) and the % of tests confirmed positive as 0.74% (<0.10% difference from prior report). Those figures are based on tests taken in the 14 days ending last Saturday. See my tracking of the testing & positivity rates right.

This week, the state also designated Marlborough, Northborough, and Ashland low risk (green or gray). Westborough, Framingham and Hopkinton remain yellow. Circling one more level out, most of our secondary neighbors are low risk except for three yellow communities (Holliston, Grafton, and Milford).

As for vaccinations,  7,146 Southborough residents had received shots by Tuesday. That means 74% of our Town is at least partially vaccinated.

72% of ages 50+ are fully vaccinated. By the states demographics count for the Town, almost 100% of Southborough’s 30-49 year olds have gotten at least one dose.

There has been a recent increase in vaccinations for residents under 20 years old. That’s based on stats before vaccinations opened up to 12-15 year olds. Judging by the buzz among teen families in the past couple of days, I’m expecting that figure to spike in the next report.

Last week, I highlighted that there is one area where progress stalled this spring. It turns out, that may be another communication issue.

By April 6th, 88% of residents 75 years old and up were at least partially vaccinated. As of this week, 10% are still not documented as having received vacccines. I followed up recently with Public Health Nurse Taylor West. She confirmed that they are having an issue determining how many seniors are still unvaccinated.

The Town’s stats for Southborough residents by age include “snowbirds” who spend winter/early spring months down south. The number of vaccinated residents reported are based on Mass Public Health tracking of vaccinations within the state. It doesn’t account for residents vaccinated in other states. West said she was working on the problem.

More highlights by age group and gender based on what Mass Public Health can confirm, are in charts below:

Updated (5/14/21 9:18): The detailed pdf on vaccinations by demographic as of May 11th accidentally listed the wrong dates.

Per the stats here and my math, 92% of adults in Southborough have been vaccinated, that’s pretty impressive! Huge kudos to us and to keeping each other safe!

Close enough. I have 91% of residents ages 20+ were at least partially vaccinated. (And 69% were already fully vaccinated!)

I don’t have the population figures for ages 18-20. (Most importantly, I don’t have figures on ages 0-11.) But we’ve been doing well with eligible populations.