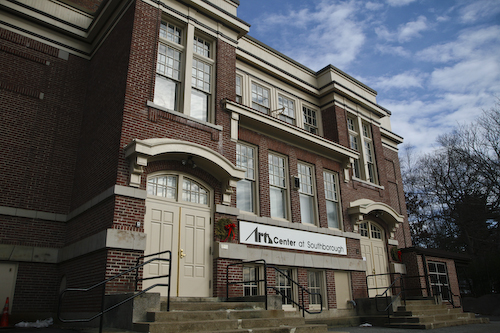 Above: This Saturday, selectmen will not ask voters to grant them the authority to sell the historic former South Union School. (photo by Susan Fitzgerald)

The proposal to purchase the historic South Union building for $700K was withdrawn yesterday. With no active proposals, the Board of Selectmen will ask Annual Town Meeting voters to indefinitely postpone Article 23.

Selectmen are likely to revisit next steps for dealing with the property next month.

Last night, Board of Selectmen Chair Lisa Braccio stated that the Town received a letter from the applicant that day.* It requested to withdraw its application to purchase the 21 Highland Street property. Selectmen voted accept the request. They further voted to make a motion at Town Meeting this Saturday to postpone the related Article.

The applicant’s request made the Board’s opinion on the proposal and related Article moot for discussion. So it’s not clear how the Board would have acted if the bid wasn’t withdrawn. Selectmen did make clear that while last night “wasn’t the time”, they will revisit the topic in a future meeting.

Vice Chair Chelsea Malinowski suggested that the board should address in a subsequent meeting the concerns they raised about a potential conflict of interest issue.

Selectman Marty Healey asked to talk about next steps for the property in June. Fellow member Sam Stivers noted the potential of federal American Rescue Plan Act funds to pay for a project there. He said if that was something they wanted to pursue, they should move quickly.

Using the ARPA funds was raised at the Capital Planning Committee last Thursday. Member Andrew Pfaff suggested the Town hold onto the parcel to develop affordable housing. Chair Jason Malinowski agreed. In past discussions, some officials have noted the proximity to the MBTA Commuter Rail station making it an ideal spot for affordable multi-family housing.

Under the just-withdrawn proposal, the South Union building would have been converted into two units. The parcel also would have been split to allow three other single family homes.

The proposal pitched preserving the faςade of the historic building, something the Historical Commission had asked for. But there were several issues that concerned selectmen and others: there was no preservation restriction proposed (so no guaranteed protection), one of the financial partners served on the Capital Planning Committee (a potential conflict that needed vetting), the proposed price was much lower than hoped for the 3 acres and building, and the Town would have needed to figure out where to relocate the departments and playground currently sited there.

At last week’s meeting, most selectmen appeared to be unsupportive of the proposal. But they had indicated a willingness to bring it to voters to let them decide. (Though, they did intend to check with an attorney on potential legal issues first.)

The Article was listed for discussion under Town Meeting prep on last night’s agenda. It is possible that the Board would have voted to postpone the Article even without the applicant’s request. (If you read my initial post from Monday, but not my clarifying update on Tuesday, click here for that.)

Braccio had agreed to bring Capital’s ideas and concerns to selectmen. In the end it wasn’t necessary to address those last night.

In this instance, the Board was pursuing a strategy of going to voters with a specific proposal. When that fell through, they unanimously determined to drop the request all together.

For those wondering, “Why do anything with the property?”

The Capital Planning Committee has expressed concern over keeping the building based on the expected overhead. The building only houses two small departments (Recreation and Southborough Youth and Family Services). The annual costs are $37K. In the pipeline, Facilities has projected that another $500K will be required to maintain the 1912 the building over the next 5 years. Last week, Jason Malinowski referred to those expenses as sooner rather than later.

*I received a copy of the letter through the Town Administrator. The letter from StreetBlock Development’s managing partner givess no explanation for the request. You can read it here.

(I’m also impressed, Beth, that you put a cedilla on the word facade. I still haven’t figured that out. Good thing I’m not trying to learn Portuguese!)

I’m impressed that you know the word for it. I had no clue what it was called. (A c with the funny underneath symbol is how I thought of it.)

I have a symbol menu in wordpress that I have been using. But I also discovered today that if I type facade, chrome will underline in red, allowing me to right click to replace with façade! Nice shortcut for the future.