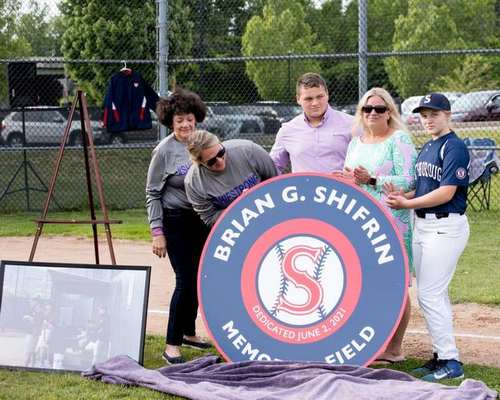 Above: A Southborough baseball field at Finn School was dedicated to the memory of Brian Shifrin. (Photo cropped from Facebook)

Twice in the past week, the community used a Southborough baseball complex to show support for families of someone who died too young. Both men honored were remembered as loving the game of baseball.

On Sunday, WCVB reported that Worcester Police officers showed up en masse to rally around the son of a fellow officer who died in the line of duty on Friday. Scroll down for more on that.

Four days prior to Sunday, Mooney Park (next to Finn School) was the site of a special ceremony. With permission from the Board of Selectmen, Little League dedicated the former Finn-1 field to the memory of Brian Shifrin. Shifrin was a former Little League coach (as well as former selectman and Recreation Commission Chair.)

As part of the celebration of Shifrin’s memory, his daughter Courtney played her last regular season game on the field that evening.

Wednesday, June 2nd was chosen for the ceremony to mark ALS Awareness Day. Shifrin publicly battled the disease before his passing in 2019.

Prior to the event, his wife Kristen posted to Facebook:

Thank you to the board of selectman and Southborough baseball for this incredible honor. Brian Shifrin loved coaching baseball. He was a funny, inclusive, great coach. He used to start each season with a welcome email that said, “congratulations your son/daughter has just been drafted to the best team in the league”. He made sure that kids thanked their parents and the umpires. He told the kids that “walks will kill you” and “don’t swing at junk”.

The photos show several speakers, including Representative Carolyn Dykema who presented Shifrin’s family with a citation on from the state’s House of Representatives recognizing Brian’s contributions to the Southborough community. Also among the speakers were BOS Chair Lisa Braccio who also presented a “proclamation” plaque from the Town and Brian’s son Charlie.

According to Little League, those who couldn’t attend can watch the event through the streaming service LiveBarn.

It is the second emotional field dedication ceremony the Town has held at the Mooney complex. In 2017, Little League dedicated Eric Green Memorial Field in memory of a 12 year old player who died in 2012.

More than 100 Worcester police officers attended a youth baseball game in Massachusetts as a show of support for the son of a fallen fellow officer, according to the police department. . .

Manny Familia’s nephew, Nazier Jones, says his uncle and Jovan bonded over their love of the game of baseball. The officer even changed his work schedule in order to attend his son’s games. . .

When he took the field for the playoff game in Southborough, Jovan Familia paused to write his father’s badge number, 267, in the dirt behind the pitcher’s mound.

Knowing Jovan was playing with a heavy heart, many of Manny Familia’s fellow officers at the Worcester Police Department attended the game and stood near the bench to cheer him on.