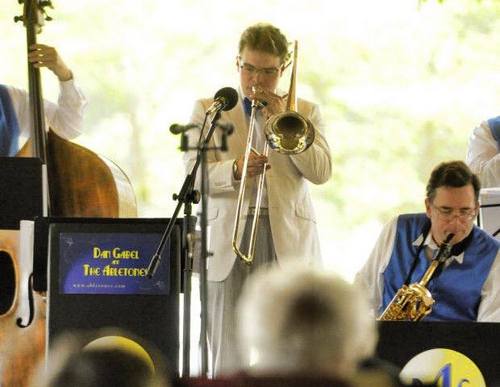 Above: Dan Gabel and the Abletones will bring their Big Band sound to Southborough’s outdoor stage tonight (image cropped from Facebook)

Tonight’s performance of the Southborough Summer Concert Series is on. Dan Gable and the Abletones will perform tonight. The Abletones play a Big Band sound, but tonight’s concert will be of its subset, the 7 piece “Little Big Band”.

On the band’s Facebook page, the Abletones describe themselves as “specializing in the music of the 1930s and 40s with fabulous look and sound”. According to the post, their bandleader has the credentials to pull it off:

Bandleader Dan Gabel played with the Glenn Miller Orchestra for over a year on a world-tour, played with the Tommy Dorsey and Hal McIntyre Orchestras, and is considered an expert on the big band era. He graduated with a Masters Degree in 2014 from New England Conservatory of Music, and is an active trombonist, arranger, bandleader, and teacher in the greater Boston music scene. He is also the music department director at Holy Name High School in Worcester, MA, and president and CEO of the American Big Band Preservation Society. . .

The Worcester Telegram and Gazette has said that “Dan Gabel and the Abletones is the real deal! A band that looks and sounds just like the WWII era.” At every show, Gabel and the band dedicate a number to the veterans in the audience, and remember those whom have served.

The public is invited to bring chairs or picnic blankets and enjoy dinner with the show. Tonight’s main food vendor is FoodCombi. The food truck is part of a program out of Clark University: “Re-entry Entrepreneurship students and Clark University students to build up their skills with starting and running a small business.”

For dessert, concertgoers can purchase food from Uhlmann’s Ice Cream.

This won’t be the last outdoor concert this summer. Knock on Wood is scheduled to play on Monday, August 30th. And two days prior to that is Southborough’s Summer Nights featuring live music. (Stay tuned for a post tomorrow morning with more details.)

Updated (8/11/21 1:07 pm): I had listed Yummy Mummy Bakery as also selling dessert. But they aren’t on the poster Rec emailed out today for the concert, so I’m not sure that’s true this week. (I wasn’t able to get through to someone live just now. So, I’m going with – don’t count on them being there tonight.)