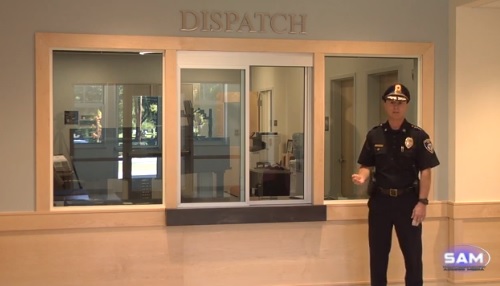 Above: The Public Safety Building completed in 2019 combines a dispatch center for Southborough Police and Fire. Now, the Town is researching if working with other MetroWest towns on a regional dispatch center outside of the building makes fiscal sense. (image cropped from Southborough Access Media video)

For a couple of years, Southborough selectmen have discussed the potential for regionalizing the police and fire dispatch center. In the past, the possibility appeared to be remote. According to the Community Advocate’s coverage, it’s now getting a more serious look thanks to looming expenses and state funding priorities.

In past discussions, selectmen indicated hope Southborough’s Public Safety Building could be a communications center with cost sharing by other Towns. It appears that it is more likely a regional dispatch would be hosted elsewhere.

So, why consider it? While the facility is just two years old, apparently the technology is in need of big upgrades.

Here are highlights from the CA’s coverage:

At the August 17 meeting, board members emphasized that they are at the start of the process, so they can weigh the pros and cons of the option before making a commitment to go further.

Fire Chief Steven Achilles said the state has earmarked $22 million for projects as a result of its “very strong interest” in locating regional dispatch centers in the MetroWest area.

Regardless of whether Southborough participates or not, Achilles said the town is facing upgrades of technology at its communication center that will come with a “hefty price tag.”

Southborough could end up competing for state funds against regional centers, so it’s a good time to explore the alternative, he said.

Achilles noted that Westborough, Marlborough and Grafton have expressed an interest in regional dispatch. If such a center was created to include Southborough, it would house eight departments—fire and police—from each of those communities. . .

Purple said a regional center would likely be a “stand-alone facility” located outside of town. Before he committed to exploring anything, he wanted to be certain the selectmen were on board with that possibility.

“Once you make the commitment to go into a regional [center], you can’t go back,” Purple said.

Chief Paulhus said that he needs to gather more information before deciding whether he’s in favor of the idea.

“It’s becoming the wave of the future,” he said. “There are problems with it, but I want to hear what they have to say…It’s evolving. My ears are open.”

He noted that the town’s system has been operating with one dispatcher per shift. It does not cover the 24-hour model.

When selectmen discussed the concept last summer, Town Administrator Mark Purple noted that when Towns discuss regionalizing they generally hope to be the host. He explained that for those not hosting, there is a lot to consider. Two big issues relate to staffing and public interactions at the building. At that time, he posed, would you have someone in need talking to a video monitor or would you staff the window? He also noted that a lot of the dispatch staff is responsible for monitoring jail cells. If you eliminate that staff, you could then be paying a police officer at overtime rates to do that.

You can read more of my coverage of that 2020 discussion here.

What in the world? A $27 million dollar facility and we are already “outdated” at our dispatch center after 2 years? How can that be? Have we gone completely mad? Who is drinking the Kool-Aid and what is in it? I am totally flabbergasted. It is already impersonal enough when you drop off something for the fire or police department (think treats here!) I have to believe the response times will be slowed if it is offsite. How can we justify using a regional off-site dispatch center when we, 2 years ago, had a state of the art system? We were told this facility would get us to 50 years or more of excellent coverage for our town.

I still can’t figure out where the police and fire station pool is. Why was that left out Now the station needs to “upgrade it’s communication”. Make do with what you have. This town has been very generous to the police and fire departments. It’s enough. This is ludicrous. .

I most certainly do not agree. Regionalization would be a dis service and a step back in my opinion. About 10 years ago I was in a police station lobby. A man walked in having a emergency, I was amazed how fast and efficient the dispatcher worked to get him the help he needed. Someone 24/7 staffing the police station is comfort in my mind. If it saves one life it’s worth it.

The issue of ‘regionalizing’ emergency services (or at least a substantial part of 1st responders) has been a viable option and discussed for well over a decade. Then, after careful consideration, Sboro residents opt for a new Public Services facility. Made sense I guess but it was expensive. Now, what? Oh my costs are going up? We need to pool resources with 7 other communities to ‘save money’? How about the impact on ‘response time’?

And, what up with this:
” [need for]… upgrades of technology at its communication center that will come with a “hefty price tag.”

So, let’s just state the obvious, first. This claim/proposal is weak on the face of it. What exact technology are we taking about? Tech does NOT advance that quickly and require any upgrades, expensive or otherwise.

We thinketh it has something to do with the “5G millimeter radiation” roll out, a tech that is not essential for rapid responding to emergencies give the inherent risks.
https://townline.org/category/sections/columns/tech-talk/