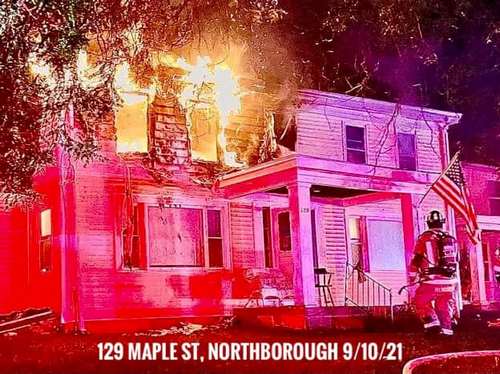 Above: A house fire near Algonquin resulted in one death and the hospitalization of a Southborough firefighter. (image from SFD Facebook)

A house fire around the corner from Algonquin Regional High School resulted in one “male fatality” and a hospitalized Southborough firefighter. Reports indicate the firefighter suffered minor injuries/heat exhaustion.

Engine 23 responded to assist Northborough with a 2-alarm fire early this morning on Maple St. Sadly one occupant [died] and one firefighter suffered minor injuries. Our prayers go out to the deceased’s family

One person is dead and a Southboro firefighter has minor injuries after a fire broke out at a home in Northboro, Massachusetts, Friday morning.

Seven people lived in the two-story Maple Street home and six managed to escape, the Northboro Fire Chief said. One resident, a man in his 70s who uses a walker, was able to get out safely, thanks to the help of a neighbor.

The fire broke out shortly before 6 a.m. in the two-story home on Maple Street, which was shut down between Ridge Road and Bartlett Street for some time Friday morning. Police asked people to avoid the area.

The fire chief said they did not hear smoke detectors on scene but officials were unsure if any were inside to begin with. An investigation into the cause of the fire is ongoing.

A fire that broke out at 4:15 a.m. Friday has claimed the life of an occupant.

A Southborough firefighter was hospitalized for heat exhaustion.

I have reached out to the Fire Chief for an update on the condition of the firefighter. I will update this post later today if I learn more.

So sad… my thoughts and prayers for the deceased and his family and the others displaced by this fire.
And at a time when we are reminiscing about all those first responders on 9/11, we learn of an injured first responder from SFD. They still respond and head in to danger to protect strangers. So grateful.