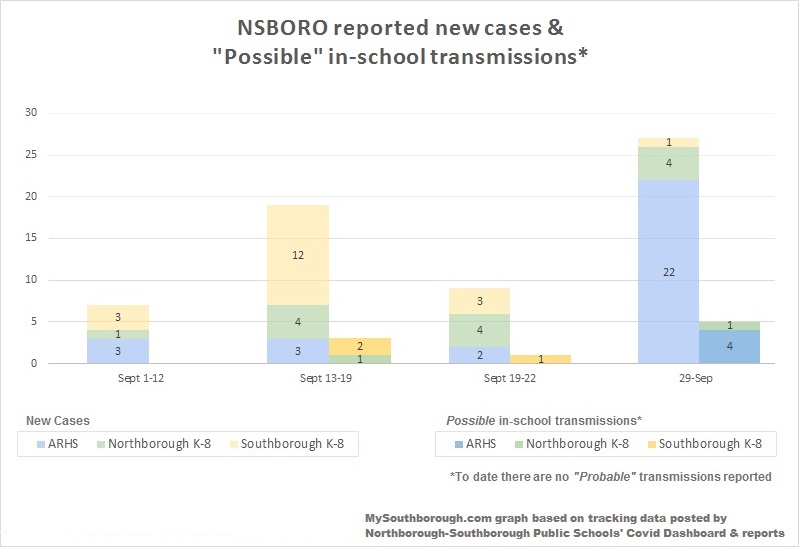 Above: The latest stats on NSBORO new Cases and “possible” transmissions between students and staff in school. (click to enlarge)

There were 27 new cases of Covid reported among Northborough-Southborough Public Schools’ students/staff in the last week. The data is part of the updated Covid-19 Dashboard covering September 23-29.

The report lists four “possible” case were transmitted in-school, but clarifies that previously reported “potential” transmissions were just “possible” and not “probable”:

With the spike in school members confirmed positive, comes a spike in identified “Close Contacts” in schools. Those who are asymptomatic are allowed to take part in the “Test to Stay” program, taking rapid tests daily in-school for 7 days. Last week, out of 269 such tests conducted, only one came back positive. Another 33 tests were given to students/staff that became symptomatic during school, resulting in 4 positives. (See graph right.)

New details show that the vaccination rates for the middle schools are fairly high in grades 7-8. The low rates in grade 6 reflect a population mostly under the age of 12. Trottier’s rates are better than Melican’s. At Algonquin, grades 10-12 rates are better than the freshman class. You can see those details below:

As for why the figures aren’t as high as the state’s weekly reports, the administration explains:

The district uses information about vaccine rates from MIIS, parent provided proof of vaccination and immunization records from primary care providers. The population data the state uses for their calculations is not from the most recent census. Additionally, not all of the individuals in each age category identified by the state attend the Public Schools of Northborough and Southborough.

You can find the full Dashboard here.

On Tuesday, the Town updated its weekly Covid figures. At that time there were 11 new cases confirmed since September 20th and 36 cases in 15 days. 14 cases were labeled still in isolation.

Below are my latest graphs tracking Town data:

As I shared last night, the Town is also promoting a new drive thru testing facility that opens on Monday. It’s coordinated with Ashland which is hosting it. You can find those details here.