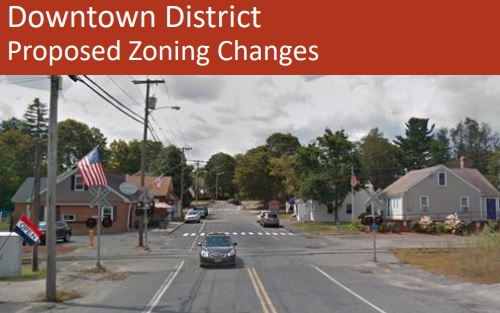 Above: This week, Planning, EDC, and selectmen came to agreement on a revised zoning Article they will ask voters to pass – hoping encourage revitalizing Southborough’s downtown without opening a door to undesirable development. (image cropped from past presentations)

It seems Town officials may have finally reached consensus on Downtown District zoning. (At least the three most involved boards and committees have.)

Last night, selectmen voted to approve bringing a revised version of the Downtown District zoning bylaw to Town Meeting voters in less than two weeks. It accepts compromises reached between the Planning Board and the Economic Development Committee.

In addition, up to four residential units would be permitted without requiring a special permit from Planning. That’s one more unit than in the Town Meeting Warrant. Yet, it’s still half the number that were in an earlier version discussed at Public Hearings this summer.

One area that EDC had objected to which remains unchanged is the Floor Area Ratio. It is still proposed as 0.30, as previously approved by Planning and the Board of Selectmen. (If you are unfamiliar with FAR, you can an explanation I cobbled together here.)

The proposed zoning bylaw is Article 10 in the Warrant for the November 1st Special Town Meeting. It is part of the Town’s efforts to revitalize the downtown area, where nothing new has been built since 1978.

The compromised version was supported by Planning and EDC during the Planning Board’s hearing on Monday night. Selectmen and a few members of Advisory also participated.

The one hoped for, but still outstanding, vote of support is from the Advisory Committee. (The committee didn’t have a quorum on Monday.) They are scheduled to take a position in their meeting at 7:30 pm tonight.

EDC, Planning and the BOS have been working on zoning changes to incentivize desirable, mixed-use residential and commercial projects with small scale businesses downtown. In recent weeks, the parties had been in disagreement over some of the details.

EDC’s and Planning’s compromise followed difficult and heated discussion. In the end, Planning Chair Don Morris quipped it must be the right compromise because no one was completely happy.

At an earlier point in the meeting, the potential of reaching consensus seemed in doubt.

While many parties repeatedly spoke about being “so close” to agreement, it appeared no one was doing much moving from prior stances.

The EDC repeated their arguments against the recommendations made by Planning in September. Planning clarified why they held those positions.

Selectman Marty Healey reiterated opposition to restrictions he characterized as an anti-housing stance by Planning. Morris objected, asserting the board approved many housing projects sprinkled around Town.

Morris furthered that if the bylaw was supposed to be Housing bylaw, it should be called that. Instead it was pitched as an economic development initiative. Members of EDC clarified that it was meant to be mixed-use zoning.

Planning Member Meme Lutrell continued to caution about allowing an Affordable Unit to be allowed by right. She worried about overloading the Building Commissioner and the potential that units wouldn’t be properly counted towards the Town’s inventory.** Healey scoffed at the idea that zoning be restrictive because of Town staff workload.

Healey said that if Planning couldn’t agree to loosen restrictions, he hoped that the EDC would move to amend the Article on Town Meeting floor. Yet, most parties agreed that getting approval from 2/3 of voters was unlikely if the boards and committees involved weren’t in agreement.

EDC members rejected that, arguing it prevented the possibility of the described three story project. Repeated criticisms were made about Planning making recommendations for changes in September.

Chair of the Board of Selectmen Lisa Braccio defended Planning’s efforts and process, telling the EDC and fellow members that she trusted the Town’s elected zoning experts.

Braccio expressed strong frustration that she was watching all the officials’ long, hard work towards zoning change go down in flames. Healey suggested that both sides were digging in their heels in defense of initial positions.

As for Lutrell’s worry about oversight of Affordable units, arguments were made that the requirements were manageable. Morris pointed out to Lutrell that the Building Commissioner reports to selectmen. If she proves to be overloaded, they would likely provide more staff or a raise. He also assured that he’s seen the Town Planner, Conservation Agent and Building Commissioner support each other to get work done.

As for the Town Meeting where voters get to decide, it is scheduled to open at 7:00 pm at Trottier Middle School on Monday the 1st. You can find my overview of what else is up for a vote (and safety logistics) here.

For the official Warrant and the zoning map related to the Article, click here. (That is also where I would expect the Town to soon post the revised version of Article 10.)

*The handout for revising the zoning Article will replace the previously listed definition for MIXED-USE DEVELOPMENT with:

**In 2013, the Town’s failure to update the Affordable Housing Inventory with the state, creating a window for a 40B project to be forced on the Town, was one of the controversies over the Park Central 40B development.

This is the wrong plan for the wrong location. It is a misguided mistake that will ruin and overload downtown. EDC got the pro developer BOS members on board, with little regard to actual residents and unwanted outcome. Picture three story, too dense clog plan and all associated traffic. Julie Connolly states that developers will not like the “compromise” plan? How does she happen to purport to know that? Also, she presented a bylaw edit / change document to Planning Board that WAS NOT discussed in OPEN meeting, in accordance with state law requirements. Nor was it VOTED UPON by the EDC, in accordance with state open meeting law. This scofflaw misdirected EDC born initiative is conceived and bullied into delivery for the express purpose of bypassing YOUR elected Planning Board. Mr. Healey on BOS has the audacity to excoriate Planning Board, YOUR elected officials as described above. This is not a “compromise,” it is a train wreck, a patchwork of a “plan” that benefits developers and leaves taxpayers paying for another unwanted mess. This plan completely ignores traffic and other key negative impacts, while enriching developers at your expense. JUST VOTE NO. Then vote these three ring circus EDC and BOS parties out.

0
Out with the Old

Fear Fear Fear. No change, blah blah blah.. The same message over and over with a different title.

Go back and check on things, it was the elected people that told the EDC to go down the path to draft this up. Nobody else was going to take what input the town already gave on this very subject and move it forward. They kept with it as they should have done. Last I checked, the EDC is here to promote economic development in town. You know the whole ED part of their name. Also, elected people put these people on the committee. This constant attack on the EDC for having people with industry knowledge is sad. Do you want people advising on how to build a bridge that work as an english teacher or do you want someone with a background in building bridges.

Voters, don’t listen to the persons behind the wizard-of-oz curtain, pulling the levers on smoke, mirrors, and whirligigs. This is an aggressive, backwards, ill-conceived plan for the wrong location. The EDC has been reconstituted numerous times due to apparent inability or disinterest in following proper procedures and STATE LAW. You will notice that there’s no comment, deafening silence, on the NO PUBLIC DISCUSSION OR EDC VOTE required by state law on Ms. Connolly’s “edits” to this zoning initiative. Since when does ONE resident get to edit zoning for the town, while breaking state law? Ludicrous. Make no mistake, this started out, not as an economic plan, but a misplaced high density housing plan. Now it is a train wreck, a hodgepodge mess. EDC IS THE WRONG ENTITY TO PUT FORWARD ANY ZONING INITIATIVES and should stick to its own knitting. Focus on the empty blighted buildings on ROUTE 9, for example. This EDC has ZERO track record and serves only as a voice for developers. As a person with experience in zoning and state law, it can be said with confidence, this group, and BOS, has no idea what it is doing.

It’s amazing that persons who purport to be experts don’t examine the absolute basics first, like traffic impacts, infrastructure, and whether or not lots actually perk, a non starter and waste of everyone’s time. Then comes the unanswered questions like costs. Who pays for the sewerage treatment plant? The taxpayers? Who pays to operate it ? You can hand that stinking poop deal right back to the private developers who will be enriched from this bypass planning board giveaway. This group is a nasty arrogant divisive group that has PICKED the WRONG location, carefully ignored resident stakeholders and blames everyone except themselves for this unwarranted sad mistake of a “plan.” This group should be disbanded.

0
Out with the Old
Reply to  WRONG LOCATION, JUST VOTE NO

I’m not surprised the EDC has been “reconstituted” as many times as you claim, when people constantly attacking them. “should stick to its own knitting…. Nasty arrogant divisive group…unwarrented sad mistake”.

I would say we shall find out at Town Meeting how many people want it, but that’s not even going to be the real outcome, it’s things like this that keep people away from town meetings.

All of the attacks on the EDC seem not only overblown, but irrelevant. Whoever proposed the original zoning, the final version was one that was vetted by and agreed to by the Planning Board and the Board of Selectmen. Members from all three groups were involved in long discussions with the zoning experts, beyond just the public hearing.

It would be better to focus on the specifics of the bylaw itself. What exactly in the bylaw do commenters who are opposed to the Article object to? If the bylaw doesn’t have the right changes, what are the right ones in your mind? Or are you in favor for keeping downtown the way it is?

Hoping to help readers understand the bylaw (and perhaps facilitate a more useful debate), I’ve posted a new story explaining what the Article would change – not only uses, but building and lot regulations, etc.