Southborough Board of Health updated their Covid figures as of yesterday morning. There were 15 new cases confirmed in one week and 53 cases in two weeks.

19 cases were labeled active out of the Town’s cumulative of 710 cases throughout the pandemic. (Since last week, five previously active cases were considered “Lost to Follow Up”.) For more details, click on thumbnails below:

The past week’s Covid cases represents a dip in the surge last week. The most recent report by Mass Dept. of Public Health (issued November 11th)* covered the peak of the surge, indicating 68 cases in town over two weeks. In that report the % of tests confirmed positive was 3.17% (higher than the prior report). The Average Daily Incidence Rate per 100,000 was 47.3 (also higher than the prior period).

For details, including a look at the Average Daily Incidence Rates in our region as of that report, click on thumbnails below: 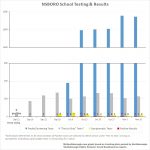 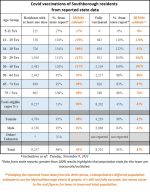 As of last week’s report by Mass Dept. of Public Health on vaccinations by town – 9,257 Southborough residents had received shots (as of November 2nd). In the first week the shots were available, approx 27% of 5-11 year olds received a shot.

For those looking for information on getting tested or vaccines, here are some links for where to find info on:

*The state’s report was based on tests taken in the 14 day period ending on the prior Saturday.

**Population figures are just estimates. I use demographics extrapolated from 2019 census data since the state’s population data was clearly outdated.