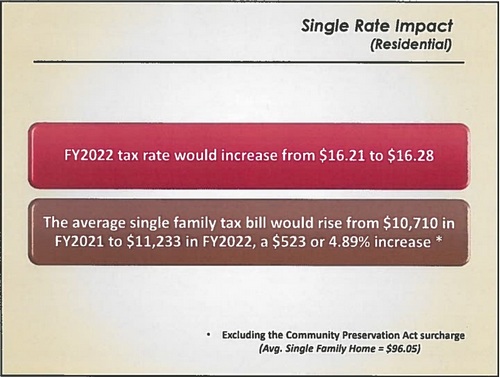 Above: 2022 Tax Bills will be based on a 0.43% rate increase that will have the effect of a 4.89% cost increase to the average homeowner in Southborough. (image from Tax Classification Hearing presentation)

Last night, the Select Board unanimously supported the recommendation of the Board of Assessors to set a single property tax rate for FY22.

It’s hardly a surprise, since as Assessor Paul Cibelli noted, the Town has never had a split rate. Still, it is worth noting that while the impact will be higher than projected last spring, it’s also lower than was stated earlier this month.

The impact will vary depending on the most recent assessed value of your property. Given the hikes in assessed home values, the average increase for a single family home owner is 4.89%, or $523. (That’s in addition to the average Community Preservation Act surcharge of $96.05.)

The increase is lower than the 5.43% preliminary figure discussed at the November 3rd meeting. But it’s higher than the 3.19% residents were told to expect when they voted on budgets in May.

Meanwhile CIP (Commercial, Industrial and Personal) property owners will only see an average $279 or 0.55% increase.

Assessor Paul Cibelli told the Board that New Growth tax dollars were down by 20.33%. He said it was the 2nd year of a decline and first time it has been lower than the 10 year average.

Cibelli’s presentation covered some of the same ground as his November 3rd discussion with the Board. He spoke about the burden shift caused by a contrasting hike in residential values and decline in CIP assessments.

So, given that shift, why not a split rate?

The Board of Assessor’s recommendation was partially based on the impact of Covid on the economy. Cibelli stated that businesses are still struggling and the ongoing impact of the pandemic on businesses remains unclear. He asserted that it wasn’t the right time to add a larger tax burden. His presentation also noted that Southborough businesses are mostly small businesses.

Other reasons echoed presentations from past years. The BOA believes that attracting new businesses to Southborough is important to providing “new tax dollars with little impact on costly town services”. They argue that a split rate would undermine that effort.

Since CIP is a small portion of tax property values, Cibelli stated that changing to a split rate “would only produce a small savings” to residents while “making Southborough a less attractive place to conduct business”.

Following the presentation, Select Board Member Sam Stivers said that the most recent data he’d seen didn’t support the hypothesis that split rates interfere with attracting and growing business in towns. He was interested in considering a split rate, as he had floated in the past, but acknowledged there was generally little support for it.

Member Andrew Dennington said he would be interested in looking at the data Stivers referred to, but not for this year. He opined that this would be a uniquely bad time to reconsider. He followed that changing long standing policy without public warning wasn’t the right approach.

Chair Lisa Braccio said she had some of the same concerns as Stivers. But referring to a map in Cibelli’s presentation, she noted that most areas with split rates are larger cities like Framingham and those in the 128 belt. She furthered that most split rate communities offer sewer, something that Southborough doesn’t.

In the presentation, Cibelli presented one split tax rate scenario for comparison, a “5% Split Tax Rate”. The 5% increase to CIP bills would cost businesses an average of $559 more while saving average home owners $131.

Vice Chair Chelsea Malinowski indicated that was the data that cemented her support for a single rate. She had wanted to see how a split rate would help ease the resident tax burden. She didn’t see enough of a swing for individual households to be in favor it.

At the BOA’s recommendation, the Board also rejected exemptions for residents and small commercial. Cibelli described them as not relevant to our community. The residential exemption is largely used in places with a large number of seasonal properties or rental units. Adopting a small commercial exemption would lead to a required increase in the overall CIP rate.

During the board’s discussion, Stivers brought up another form of tax mitigation he was interested in. Referring to their November 3rd discussions, he again suggested using federal ARPA funds to lower residents’ increase to under or close to 4%. As he expected, no one else voiced support for revisiting the idea.

The Board invited public comment prior to their vote, but no one used the opportunity.

More and more excuses from the town as to why they don’t split the tax rate. They say it is to allow more businesses to come in but every time somebody wants to come in they give them the run around so bad, they finally leave and go to a neighboring town. When does it stop with these people running our town? Almost every person in the Town Hall live in other communities so they don’t care what our tax rate is, they aren’t paying these taxes. This is shameful! Last week the entire Assessors office was closed on Friday…the whole department was off!! Who is running the looney bin over there. Nobody to help the taxpayers on a work day? Incredible!

Are you sure the office was closed the whole day? The Town House (and most Town Dept) hours end at noon on Friday. While it obviously gives staff Friday afternoons off, it also allows the departments to be staffed until 7:00 pm on Tuesday evenings. The schedule was created to allow residents to do business one evening per week.

Yes, they were closed the entire day, they had a sign on the door as you went to enter the town house. I understand they are open until 7 on Tuesdays and close at noon on Friday but I had that day off and found it quite irritating that a whole entire department would be allowed to shut down.

I agree, the excuses about not splitting the rate are extremely weak, to the point that it feels like people don’t understand basic math. But, first to say small businesses are struggling due to covid is crazy. The Russel 2000 index which tracks small cap businesses is up over 50% since pre-covid. The economy is booming. Not too mention that the reason we are discussing this at all is because commercial real estate prices are down (or at least not up) and that directly translates to a cost savings for businesses.

Also, the one scenario of the 5% split tax rate is a disingenuous example. All we are asking is that the rate is split such that the math comes out to match what the taxes would have been last March. If those numbers were ok with the board then, why aren’t they ok with the board now. The rate split can be adjusted yearly so that any discrepancies in the difference in values between residential and commercial real estate are factored out of the equation so that the percentage of taxes generated from residents verses CIP stays constant.

0
as Southborough commercial office space continues to be abandoned

…the EDC steadfastly maintains Southborough must maintain a single tax rate. Their argument goes something like a split rate would DISCOURAGE businesses from locating to Southborough.

Well EDC, I hate to break it to you, but since you’ve been in existence, more and more office spaces along the route 9 corridor continue to become vacant. Congratulations on a job “well done”. Signs advertising “vacancy” and “for lease” pepper the highway.

Keep up the “good work”. Time for you ro disband. Another complete waste of taxpayer money.