Above: More news (and images) are out on the high school’s performance of the whimsical musical based on Dr. Seuss books. (photo cropped from post last night by Gonk.Arts) 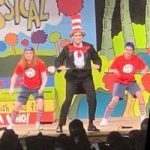 Algonquin students have a thing or two to sing about this week. Last night was the opening performance of the school’s first big production since the pandemic began.

As I’ve previously posted, ARHS’ musical Seussical is on stage this week.

It seems like a fun choice for students who came up through NSBORO elementary schools. Traditionally, the lower grades have celebrated Dr. Seuss each year as part of their focus on reading skills.

The remaining performances are 7:00 pm tonight and Saturday, plus a 2:00 pm matinee on Saturday. (Scroll down for information on tickets, the plot, and NSMA’s related Candygram fundraiser.)

I my initial post, I didn’t have details on the students involved. This week, the ARHS Harbinger posted a behind the scenes look. Here are some highlights:

With shifting advice from the medical board, it has been difficult for both actors and crew members to follow regulations while also getting everything done for the show. According to current guidelines, performers will not have to wear masks if they are fully vaccinated and have a negative COVID result within 48 hours of the show.

Based on Dr. Seuss’s books, the musical is a whimsical and lighthearted choice for the return of live performances.

“We are finally back; I think that is really big for ARHS drama,” technical director senior Jared Lipkin said. “It is a fun show; I think people can come and expect to have a fun time and laugh. It’s something everybody needs.” . . .

Details in the story include some of the cast leads:

You can find more, including perspectives from the Pit Orchestra and Stage Crew & Set Design in the full article here.

Below are more details on the play, tickets, and Candygrams from my initial post. . .

The fantastical story is a family friendly one that brings to the stage several of Dr. Seuss’ most well known characters:

The Cat in the Hat tells the story of Horton, an elephant who discovers a speck of dust that contains the Whos, including Jojo, a Who child sent off to military school for thinking too many “thinks.” Horton faces a double challenge: not only must he protect the Whos from a world of naysayers and dangers, but he must guard an abandoned egg, left in his care by the irresponsible Mayzie La Bird. Although Horton faces ridicule, danger, kidnapping and a trial, the intrepid Gertrude McFuzz never loses faith in him. Ultimately, the powers of friendship, loyalty, family and community are challenged and emerge triumphant.

For Algonquin’s play, the tickets are $10/student and $15/adult. They can be purchased here.

The Northborough-Southborough Musical Association is using the production as a fundraising opportunity. 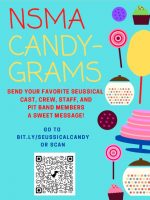 The audience/public can purchase candygrams to performers and those behind the scenes:

Seussical the Musical at ARHS is November 18 and 19 at 7pm and November 20 at 2pm and 7pm. Please show your support for these participants by purchasing a $5 Candy Gram that will be delivered to a student after the designated performance. Proceeds go to the NSMA which supports scholarships and music education in the Northborough Southborough district. Questions? Contact nsmatreasurer@gmail.com