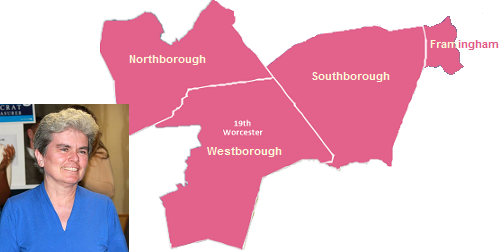 Above: Kate Donaghue, a Democrat from Westborough with a background in local politics and activism, has announced a run for the new incumbentless State Representative District that includes Southborough. (photo from her campaign website)

Back in November, I wrote about the impact that redistricting would have on Southborough. We’ll need to elect a new State Representative in a wide open election for the seat.

Based on the new districts effective as of the 2022 election, Southborough will no longer be part of the 8th district represented by Carolyn Dykema since 2009.*

Our town is part of a newly created district, 19th Worcester, with more than half of Northborough, most of Westborough, and a small chunk of Framingham. According to an October story by WBUR, Assistant House Majority Leader Michael Moran claimed:

voting patterns suggest an opportunity for the GOP to win in the new 19th Worcester District, an incumbent-free district. . . made possible by population growth in the area.

That could be a challenge, since media reports indicate that the first candidate to announce a run is a Democrat political activist who appears to have serious credentials in local politics.

I’m running for State Representative to make a difference on issues that impact my neighbors. For almost 50 years, I have been an active member of the Westborough community.

As a mother to a son who died of an overdose, and a caregiving spouse who recently lost my husband to cancer, I have experience and insights into the challenges with our healthcare system that plague too many families in Westborough, Northborough, Southborough, and Framingham.

I intend to use my voice to fight for our communities on healthcare, tackling climate change, and supporting public education.

You can read more about her announcement and background in Framingham Source. You can also read a 2014 profile in the Boston Globe that called her “the iron woman of Massachusetts’ political canvassers”. Based on that background, it’s not surprising that her website touts a plan to build a “a grassroots campaign of neighbors”.

The run was considered newsworthy enough to be included in Politico’s Massachusetts Playbook column yesterday.

You can learn more about Donaghue here. Her campaign website indicates that her platform isn’t solely about healthcare, though it’s the first of three priorities:

As your next State Representative, Kate will:

Now, the big question is, who, if anyone, will be running against her for the seat? We’ll have to stay tuned.

*From 2009-2011, Representative Dykema only represented two of three Southborough districts. She has represented the entire town since 2012, under the redistricting based on the 2010 Census.