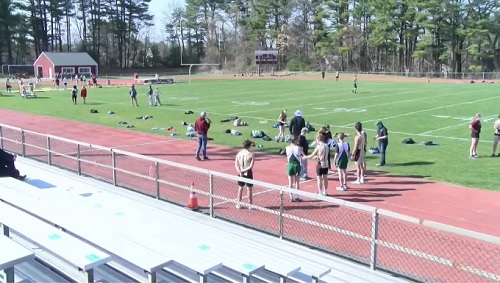 Above: The Regional School district will be publicly presenting a project to upgrade Algonquin’s (mostly) 30 year old track and field complex. (image cropped from NCAT video)

A week from tonight, the Regional School Committee meeting will hear details of a proposed upgrade to the school’s Athletic Complex.

The meeting was moved up from later this month to allow the committee to review the concept before it is presented to Annual Town Meeting voters this spring.*

No Article is on the Warrants for this spring for funding the project. The point is to give a preview of the project so voters know that it’s on the horizon for next year’s Town Meeting. Superintendent Gregory Martineau explained that ATM presentations will be of the project schematics and estimated cost followed by Q&A.

Last month, Martineau told the committee that given the age of the track and fields, and upgrade and improvement isn’t a question of “when or if”. The track is original to 1994. He described the complex as “lightly renovated” in 2004, but much of it is 30 years old.

He followed, the decision to be determined with the community is what the scope should be:

There’s going to be some things we have to do, and there might be some decisions with community about expanding that scope to really think about the next generation of students and community members who access and utilize those resources on our campuses.

Martineau updated that he’ll be asking the Committee to form an Athletic Complex Building Committee “to take the lead on how do we market this and how do we get community buy in”.

In June, the administration briefed the Committee that it had been working with a consultant paid for by the Algonquin Boosters for a “conceptual study”. Gale Associates developed plans, and schematic designs and drawings. The committee supported moving ahead with work towards a Town Meeting Article.

Since then, the administration and consultant took a deeper dive including engineering plans and even soil samples.

As shared in a November discussion of the school’s Capital Expense Plans, the project was estimated at over $7M. It included the following items and estimates:

At that time, those numbers still needed “firming up”. How much will be requested from taxpayers was also still up in the air. There had been conversations with Boosters about potential for some outside support.

During the discussion, Regional School Committee member Dan Kolenda asked if they had they looked at including an indoor facility. That hadn’t been explored.

Following up in March, Martineau answered that adding an indoor facility was ruled out when consultants estimated $30-50M. Chair Paul Desmond quoted the consultants as referring to that concept as “another stratosphere”.

Updated estimates for the concept that is being pursued weren’t included in the recent update, but will be shared next week.

Martineau stated plans to schedule a special additional meeting to focus solely on the topic. However, it looks like a decision was made to instead move up the meeting originally scheduled for April 27th, which is no longer on the calendar.

*Northborough Annual Town Meeting opens on April 25th. Southborough’s opens May 4th and is expected to continue to May 5th.