The Select Board is looking to recruit a volunteer to fill a vacancy on the Capital Planning Committee. They are seeking:

residents of the community who are willing to volunteer their time in assisting with the review and evaluation of capital items and projects contained within the Town’s Capital Plan, and developing strategies to move these projects forward for approval in a financially responsible manner. 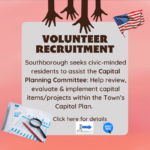 Take a look at [their] charge and let us know if you have the civic interest and the availability to assist this important Committee. Please contact the office of the Select Board if you’d like to chat about the role this committee plays in our organization.

The announcement shares an outdated charge of the ad hoc committee. (It refers to deadlines in 2020.)

That doesn’t reflect lack of interest by the Select Board in the committee. It’s a result of focusing on a more comprehensive charge for voters to pass at Town Meeting in May.

Officials hope to have a standing committee adopted this year.

Based on past practice, it’s safe to assume that members of the ad hoc committee would be invited to serve on the standing committee proposed to replace it.

The ad hoc committee was formed in 2020. The goal was to make recommendations to the Select Board and Advisory Committee in time for planning for the 2021 Annual Town Meeting. Officials were so pleased with the committee’s work, they sought to make its role permanent.

An Article to form the Capital Improvement and Planning Committee was on the Warrant in May 2021. It was indefinitely postponed based on voters voicing objections to a planned overlap between the Advisory Committee and CIPC.

The discussion took place during consideration of an Article to amend the Advisory Committee’s bylaws. The proposed allowance of allowing an Advisory member to serve on the CIPC was one of the issues objected to by voters including Karen Shimkus and Al Hamilton. Where officials had promoted synergy, they worried about conflict of interest.

Shimkus advocated that the Advisory Committee is meant to be a check on the powers of the Select Board. The official budget and expenses are put forward (mostly) by departments that report to the Select Board.

That won’t be an issue with the Article headed to the next Town Meeting.

A revised version of the Advisory Committee bylaw amendments was passed at the Special Town Meeting. It didn’t include an allowance for the overlap.

The CIPC Article now proposed for the upcoming Annual Town Meeting has also been revised to address those concerns. It no longer states that a representative from Advisory should serve on the committee.

As it did last year, the draft bylaw also prohibits more than one member of CIPC serving on any other boards or committees (other than its own subcommittees).

As for the CIPC’s responsibilities under the latest posted draft, it states:

this article establishes a committee that will be responsible for creating and maintaining a rolling ten-year Capital Plan across all government entities and will ensure consistent interpretation and execution of that plan. The Committee will work in collaboration with the various government entities that propose capital expenditures. It will report on the plan to the Town Meeting and advise Town Meeting on proposed capital expenditures. . .

A. Work with Town Finance Team to maintain town’s 10-year capital plan. This will be achieved by regular meetings and discussions with Town Departments, Boards, and Committees that will put forward requests for Capital Funding as part of an Annual or Special Town Meeting. While this Committee will have no oversight of the annual operating budget, they need to be aware and receive regular updates of the operating budgets and other revolving or enterprise funds to ensure that capital needs are considered in an appropriate order and timing.

B. The CIPC shall follow any capital or other financial policies adopted by the town and provide regular feedback for any potential improvements or enhancements to these policies.

A. In the absence of a formal building committee for a specific item contained in a capital article, CIPC will have at least one member selected to formally collaborate with the project sponsor and regularly report on progress. Concerns about project status, budget, or overall management will be brought back to the full CIPC for formal discussion and proposed action.

B. If any elected board decides to have a separate Building Committee for any specific project, then at least one member but not more than two members of the CIPC shall be appointed.

You can learn more about the Committee (including agendas and minutes of past meetings) here. To watch some of Capital Planning’s recent meetings, click here.

To reach out to the Select Board, you can email selectboard@southboroughma.com. You can also apply for this or any committee vacancy by completing the New Citizen Activity Form here.