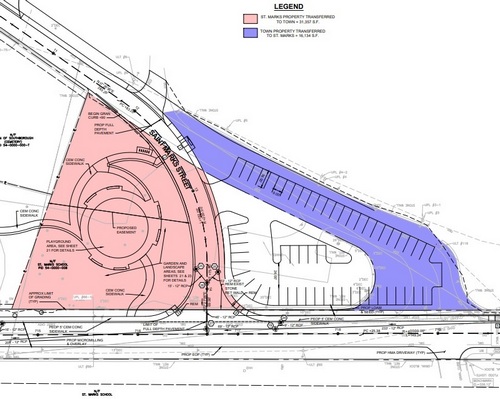 Above: The Select Board is seeking voter approval to finalize a swap between the Town and St. Mark’s School of “interest in property” for two parcels to allow completion of a Town road and park, and a larger parking lot near the school’s sports fields.

On Wednesday night, voters will be asked to approved permanent easements for the St. Marks Street and pocket park project. It’s a project that has spurred a lot of controversy.

Last week, Select Board members clarified that Article 25 is grant the Town the property rights needed to bring the street forward as a public way. It would also permanently transfer an “interest in property” for the new road layout and the area of the park.

Although they are likely to ask voters to stick to that topic and not project details and history, they’re not likely to get their wish.

There are residents who have publicly expressed anger about the principal of seeking easements after a project is already in progress. For some, it’s simply a matter of principal. Others are at odds with the project itself for multiple reasons.

I’m certain that in addition to debate over Article 25, related concerns will be raised in other discussions on Wednesday and Thursday night. So, I’m giving more background and an update on the project below.

There was some debate with resident Patricia Burns Fiore about what the easements would mean. At the April 26th Select Board Meeting, Fiore argued about proceeding that expended funds on a project to to increase parking for St. Mark’s School on Town owned land and build a Town park on privately owned land.

Select Board member Marty Healey didn’t specify that the easements would transfer ownership, but repeatedly argued that legally transferring an interest in property is property.

There have also been questions about the Town’s ability to have been working with license agreements rather than easements. Select Board members have argued that Town Counsel advised that the agreements covered the work. The issue they are now seeking to resolve is that without easements, the road would remain a private way. The Board has justified that the process was necessary in order to react in time to receive grant funding from the state.

But that grant funding has also been a sticking point. The grant was initially awarded, and promoted, as a “History Walk” with paths that would connect the Old Burial Ground and other historic landmarks near the Library to a Town green. When bids came back too high last spring, that part of the project was scrapped. The Board said that could be tackled as a future project.

At the time, DPW Superintendent Karen Galligan notified the state of the change, and was given permission to proceed. Last week, Marty Healey spun that the project still is a “History Walk”, since sidewalks on the road will connect the green to the other historical spots in the area.

Answering questions about how the grant was applied, Select Board members explained that the state allowed the Town to “Plug and Play” to spend the grant funds on other aspects of the overall project in 2021, then use other funds to cover subsequent costs the grant would have covered.

But the DPW hasn’t been able to provide the public with clear answers on the project’s cost and how much of the Town’s available road money is dedicated to it.

Worth noting – all four Citizen Petition Articles headed to Town Meeting on Thursday appear to have a direct or indirect link to concerns raised related to this project – over legality, transparency, and accountability.

To pursue a less expensive project, a revised design was created of a circular sidewalk park that was meant to include a playground in the center. (The hope was to move equipment from the Arts Center Playground when the Town was pursuing bids for selling the property. That was unsuccessful.)

When the Select Board rejected an unfenced playground right off of Route 85 as unwise, the design was advanced with an empty center. There was public criticism about tearing down trees to install a circle of sidewalks just to circle an area of mulch. (A native plant/pollinator garden is also planned – but not in the center of the park.)

So the Select Board created a St Mark’s Street Park Working Group to decide what should be in the center. They were asked to report back to the Board by April 15th.

Recently that deadline was extended. The Working Group has been working beyond their charge. Members have been concerned about the question of whether the site is the location of an old indigenous burial ground.

The Mass Historical Commission conducted a site visit. A follow up letter in November advised the Town to conduct an archeological survey of the site before proceeding with more construction. (Once land is disturbed, ground radar would no longer be able to provide useful data.)

Select Board members decided not to halt for a survey, arguing there wasn’t clear evidence to support that there were graves in the area.

But the Working Group wanted to get a better understanding of that situation before making a recommendation. At this point, they are split about the weight of the evidence and how to proceed. (Scroll down for more about that evidence.)

Select Board’s representative on the group, Andrew Dennington, opposed conducting a survey. He argued an area of trees north of the Burial Ground wall provides a buffer. Chair Marguerite Landry has urged for extending that buffer. She called for removing a section of the sidewalk and simply seeding the ground in that section to avoid further disturbance. (See my image right indicating the areas they were discussing.)

Landry followed that would still allow the potential for a future excavation. As a Library Trustee, she explained the tweaked design would allow the Children’s Librarian to use the upper grassy area for story times. Other sections of the park would be too noisy due to traffic. She didn’t sway members interested in a survey.

The group plans to further discuss at a meeting next week.

Some members have expressed an interest in conducting a dig out of caution and/or historical interest. (Although no evidence of remains have been found, some old plates and what looks to be an old building foundation have been.) Member James Nichols-Worley was able to get one rough estimate for the work – $15,000 for a 90 day study of ⅓ of an acre.

Former Southborough Historical Commission Chair Michael Weishan* first raised an alarm after trees were clearcut and roots dug up. He reminded selectmen that there was evidence a prior ground radar project found that old graves weren’t entirely contained by the Burial Ground walls. He claimed that the torn up area was likely a location where there had been Nipmuc graves.

Prompted by Weishan’s inquiry, the Mass Historical Commission conducted a site visit. A follow up letter advised the Town to conduct an archeological survey of the site before proceeding with more construction. (Once land is disturbed, ground radar would no longer be able to provide useful data.)

Select Board members have argued that there isn’t clear evidence to support that there were graves in the area.

The book Fences of Stone indicates that starting in 1702 residents of Stony Brook, then of Southborough, used the site of an old Nipmuc Burial Ground (from 1606 and 1650) as their cemetery.

In 2000, the Southborough Historical Society published “A Walk Through History“. It stated that in 1727, a stone wall was laid around the perceived boundaries:

In the winter of 1727-8 those not involved in building the Meeing House laid a stone wall around the Burial Ground. They cut down the heavy brush along the northern and eastern edges which had sheltered the Nipmuck graves. “Thus were the dead belonging to the region’s first people bounded in with those buried from the English settlement.”

Given the gap of when the wall was built, some question if it would have really contained all of the graves. In the early 2000s ground radar study was conducted by SHS of the Old Burial Ground to identify any unmarked graves. A former resident who was involved informed the Select Board

member who is on the Working Group, that radar was conducted immediately around all of the stone walls. The only location where they found graves outside, was the opposite end of the cemetery. (Image right is  a screenshot I edited from the map image shared at a recent Select Board meeting.)

Chair Lisa Braccio has argued that the project wouldn’t provide any deeper disturbance to the land than what already occurred. Member Marty Healey argues that if any remains were discovered, contractors know to immediately stop for an investigation.

The Historical Commission has taken a stance against the project. They issued a letter to St. Mark’s, attempting to persuade them to put the project on hold for a study. The last I saw, the school hadn’t responded directly to the Commission. Based on Select Board comments, it appears the school wishes to proceed.

On the Town’s website, you can find the Warrant with the Article – number 25. There are also handouts posted showing arials of the intersection from prior years, street views, the project layout, and the parcels to be swapped. Click here.

*Weishan resigned following an investigation by the Select Board over some invoices in 2015-16. He has claimed it was a retaliatory act by the Board for the questions he has raised about this project and their handling of it. The Select Board has denied that and referred a Conflict Violation to the state. Since then, Weishan filed an additional Citizen Petition Article to allow for recalling members of the Select Board.