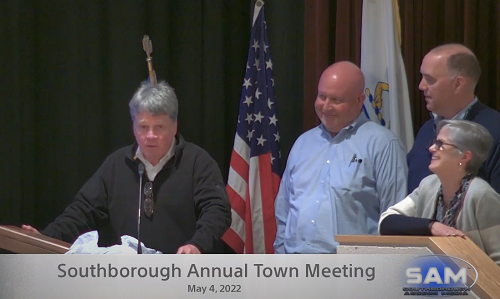 Above: Planning Board’s Don Morris gave a brief, self deprecating speech to Town Meeting in thanks for the recognition of his decades of service. (image cropped from SAM video)

I covered some of the arguments at last week’s Town Meeting (and I’ll be covering more tomorrow*). But there’s a lot more to the Annual meeting than that.

As part of the first night, residents are asked to take a moment of silence in remembrance of all our residents who died in the prior year. The meeting is also used as an opportunity to thank people (living and gone) who have served the Town.

This year, Moderator Paul Cimino called special attention to the passing of Paul Berry (who served as Town Clerk for over 45 years) and Firefighter Lisa Thompson who died last Friday.

Then former Personnel Board Chair Stephen Morreale eulogized Russell Millholland for over four decades of service on Southborough Town boards and committees. The army veteran was a member of the Personnel board for over 20 years and and took part on many interview search committees and dozens of job searches. Other committees he served on included the Cable Committee, Advisory Committee, the Planning Board, the Industrial Commission, and the Council on Aging.

Next, the Town honored a volunteer still with us. Planning Board Chair Don Morris is stepping down after 40 years on the board, more than half the years the elected board has existed. Last week he made his last Article presentation as a member of the board. This Tuesday, voters will choose his replacement.

On Wednesday night, Morris was thanked by members of Planning and the hall. Member Andrew Mills presented him with the gavel and block that he “wore out” over his many years as Chair. Morris recalled that after the first meeting he was involved in, he told then-Chair Jim Denman that he didn’t know what he was doing. Denman told him not to worry about it. He joked, “So, for the next 41 years, I didn’t know what I was doing and I never worried about it.”

That belied earlier comments by Mills on behalf of the Board. He said Morris was famous for telling applicants and residents, “‘The Planning Board and department is going to do it right’ when it came to finalizing projects.” He noted it led to hours of meetings, clarification requests to Town Counsel, and extra meetings to allow the public to view draft decisions. Mills credited Morris as a driving force in “protecting the rural and quaint charm of Southborough while it was growing significantly through his tenure in town.”

Later, under Reports, the Southborough Library announced that this year’s winner of the Peggy Tuttle Award for Library Service Distinction was granted to Judy Budz. The recognition honored her volunteer service as a former member of the Library Board of Trustees and the Advisory Committee. Director Ryan Donovan shared remarks from former fellow Advisory member John Rooney lauding her “unwavering dedication and commitment to every resident in Town.”

The Southborough Access Media is available here to watch any/all of those moments.

For those who have never attended a Town Meeting, it’s worth noting that in addition to recognitions like these, the nights are peppered with moments of humor among voters and officials.

If you want to feel more involved in the Town and community, I recommend carving out a few hours to attend a future session. Another chance is coming up this fall. Stay tuned for details on that.

*I was able to fit in drafting this post last Thursday before the action I still need to cover took place.