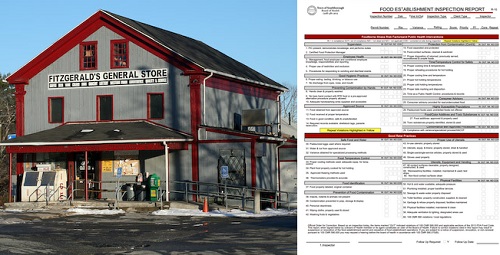 Above: This week, BOH discussed addressing safety issues at Fitzy’s and other issues related to food vendor permitting and inspections. (image left cropped from photo by Susan Fitzgerald)

In late April, a long time Southborough convenience store was closed for days due to safety violations. This week, the Board of Health discussed the permit status and plan.

Other food business discussed at that meeting included clarification on the limitations for residents cooking and/or selling food out of their homes.

Fitzgerald’s General Store (aka Fity’s) has been serving the Southville area of town since the 1850s.

The market’s doors were recently closed due to health, fire, and building code violations. They reopened based on the owners’ compliance with officials’ demands. That included discontinuing selling food from its own kitchen and deli.

On Monday morning, the Public Health Director and owner recapped the issues raised and the steps that have been and need to be taken.

Director Heather Alker said that there were issues when they visited the store in November, including expired foods. Based on violations in the deli and kitchen, her department had recommended closing the deli at that time.

In late April, prior to the food permit expiration, they made a return visit. In violation the kitchen was operating for a couple of products and there were numerous other violations including a large amount of expired food, evidence of pests, unsafe clutter, and the need for ceiling and floor repairs.

Prior to reopening, the kitchen was permanently closed. Some deli equipment was removed and the remaining kitchen equipment (with gas connections) were being removed that day and lines being capped.

Much of the “clutter” has been removed and the store will be thoroughly cleaned. Alker wanted to see the floor fixed, to eliminate safety issues for tripping, and also to see ceiling tiles fixed. Her biggest focus was looking for improved plans for food expiration and pest control.

The owner, Harry Patel, felt that elimination of the kitchen would get rid of the main attraction for pests. But he promised to have his contractor come up with a more aggressive plan. He mentioned their monthly visits. Alker opined that there should be a plan for his actions between the visits.

Alker had noted that the biggest concern was food used by seniors and young children, due to their vulnerability to food borne illnesses. She indicated that there were many expired canned goods in that category.

Upset BOH member Nancy Sacco told Patel that if vendors weren’t doing their job, it was his job to make sure that work gets done. Member Safdar Medina recommended some kind of inventory sheet be kept highlighting foods that would soon be expiring.

The owner was still dealing separately with the SFD and the Building Commissioner about other permit issues. He cleaned up clutter that was an egress concern. Other issues include an unmarked exit, issues related to propane tanks and the oil tank, and a gap in stairs to the upper office (not accessed by the public).

The Board approved a temporary license through June 30th to resolve the issues. If they are in full compliance, the annual permit will be issued. Click here to see the Fitzgerald’s inspection report.

This is the second time in a year that a longtime food vendor in town was closed for safety issues. The first was Pizza 19. As I wrote about in my coverage of the closing, that appeared to be related to the Board of Health’s newly diligent approach to safety inspections.

Recently, the Board began posting reports from safety inspections to its website here.

For close to a year, the Town has been working with a contracted inspector through a regional collaboration. That inspector issued her notice of resignation. On Monday, Alker updated that Northborough, which leads the collaboration, has posted a hiring notice.

Alker warned that she had seen other town’s advertising the need and believes the pool of candidates is small.

Inspector Diane Legere joined Monday’s meeting to address an issue related to residents cooking and selling food out of their homes. She clarified that residents can sell foods that they cook at home as long as they are “non-TCS”. That refers to Time and Temperature Control foods. It is acceptable for ingredients to include TCS foods, as long as the finished product isn’t.

In other words, using eggs and butter to bake and sell muffins and cakes that don’t require refrigeration is fine. Making meals that need to be stored in a fridge or freezer isn’t.

The inspector noted that she had failed to pay attention to a vendor’s application missing a full menu as an attachment. She provided a permit that she shouldn’t have. She isn’t reissuing a permit but did give the vendor 30 days notice.

Legere said that for residents selling TCS foods there are other options outside of their homes. She referred to “shared kitchens” that people can pay to use and VFW/American Legion type halls with kitchens that can work out mutually beneficial arrangements. She confirmed that church kitchens can also be used – as long as their kitchen is licensed.

Upon questioning, she clarified that under farming laws, residents can sell eggs as long as they are unwashed and not previously refrigerated. They may also sell whole, uncut produce.

Nurse Taylor West noted that residents are supposed to notify animal control when they purchase chickens. The officer then provides them with guidelines and what diseases to look out for. Legere recommended the BOH think about writing up regulations for keeping chickens.

On a slightly related note – I’ve previously reported that Nan’s Kitchen will be filling the void left by Wendy’s closing last fall.

Last night Nan’s owner went before the Select Board for a Liquor license hearing. The owner updated that he plans to open in July. The actual date will depend on how soon the state follows through with issuing the license approved by the Board. The new restaurant will use the drive through area – but only for curbside pickup of prepaid orders.

I am not surprised all these violations were found. The owner blames the pandemic in the article but there have been expired foods being sold wayyyy before the pandemic began. I stopped in for sour cream many years ago and as I walked out after buying it I noticed it was months past the expiration date. I went back on and the other sour creams were the same way. I’m just glad those health and fd departments checked things out and hopefully the store changes their ways and turns things around.

Unfortunate to hear the news about Fitzy’s. That location is prime for some sort of café/deli ad has plenty of parking.