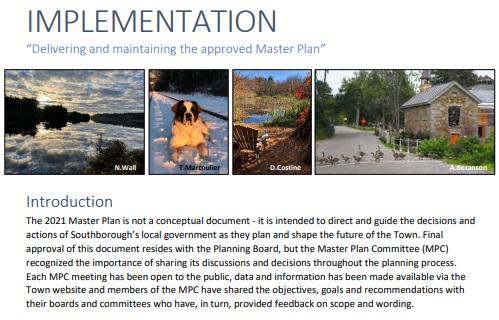 Above: The final version of the Town’s Master Plan includes the establishment of two new committees to help follow through on identified goals. (image cropped from plan)

Earlier this month, the Planning Board accepted the final version of the Town’s Master Plan and dissolved the committee that created it. Last night, they created a sub-committee to oversee its implementation.

It’s also worth noting that the final version included something that wasn’t specified in the May draft. Another committee will be established by the Town to oversee the goal related to creating a Community Center.

As I previously posted, the Master Plan is meant to serve as a blueprint for Town officials, outlining goals and priorities. The “2021 Master Plan” highlights that the biggest public criticism of the 2008 plan was the lack of follow up.

To avoid a repeat, the Plan includes a section defining implementation goals and who is responsible for them. It also includes the creation of a committee to keep track of that work. (Though, the earlier draft referred to it as a Group.)

This sub-committee of the Planning Board will comprise five members from the original MPC committee to provide continuity. The [Master Plan Implementation Committee] will meet with each board and committee, every six months, and review progress on their assigned recommendations. An update, including issues and concerns raised during these bi-annual meetings, will be provided to the Planning Board each quarter.

The MIPC will also be responsible for managing “community outreach on progress” and reporting to Town Meeting. For more details, go to page 132 of the plan.

Last night, the Board approved the following four MPC members who volunteered to serve on the MIPC:

That left one vacancy still to be filled.

At the Master Plan presentation (at the June 6th Planning Board meeting), Select Board member Sam Stivers explained why he believed the prior plan was “shelved” and largely ignored but this one won’t be. He noted that the 2008 version was created by consultants, and indicated there wasn’t significant involvement by Town management.

The new plan was a collaborative effort that included representatives from most Town Committees and Boards. Relevant sections include language written/agreed upon by those committees.

That echoes statements made by Planning Chair and former Master Plan Chair Meme Lutrell. Lutrell has touted that, thanks to the work of the group, it is a “uniquely Southborough plan”.

Edits to the Draft Master Plan

As I previously posted, in May the Town promoted a public comment period for a draft of the plan. That resulted in some edits made prior to adoption of the final version on June 6th. The final report also included the insertion of photos contributed by the public.

Comparing the documents, it appears that most changes were wordsmithing. But for those that took the time to read the May draft, here are the most significant insertions/revisions I found in the final version:

(Scroll to the bottom for more on that in a separate section.)

Under Economic Development, a look at tax revenue includes the explanation:

Under Housing, clarification was added challenges in the changed housing market have meant that employees working for the Town, including police officers and teachers, “are not able to find appropriate accommodation” in Southborough. That is later echoed and expanded beyond town employees under information on contributing factors to commuter traffic growth:

It is notable that less than 6% of Southborough workers live in the Town, potentially due to a lack of affordable housing

In a semi-related addition, the plan also now notes that over 75% of respondents to the Town’s Vision Survey responded it was important/extremely important that the Town address increasing traffic flows. (Though, apparently more emphasis was on traffic passing through Southborough on our roads.) Also, close to 70% “highlighted the importance of working with MADOT to reduce congestion on Route 9”.

Board of Health and Public Schools accomplishments/goals

A detailed list was inserted of the Board of Health’s increased responsibilities established in recent years. A list was also added of the public schools’ accomplishments since the 2008 Master Plan, and the schools’ “Vision 2026” strategic plan for looking forward.

The plan’s goals include developing a strategic plan for the development of “community gathering spaces”. Initially the implementation plan designated the Select Board as responsible. The final version calls for establishing a Community Center Committee to take on some of the burden.

At the Capital Planning Committee last night, members discussed working with the Select Board on a recommended charge for that committee.

Capital Chair Jason Malinowski pointed out that the Town can’t build all of the things each interest group would like to see. Compromise will be needed and it shouldn’t be based solely on recommendations by their small committee. He described a vision for a group that included representatives from Capital, the “broader public”, Recreation, Library, Council on Aging, and perhaps others.

His hope is to have a recommendation ready by the time the Neary School Building makes its recommendation. He noted that if the committee recommends closing Woodward School, the state will want better answers on the Town’s plans (and community support for) what it would do with the building.

Lisa Braccio who serves on both Capital and the Select Board agreed with Malinowski’s vision. She referred to past success of the committee to look at potential uses of the golf course. She supported giving the vested parties a seat at the table.

The group agreed to have Malinowski work with Town Administrator Mark Purple on a draft charge for the Select Board to consider.