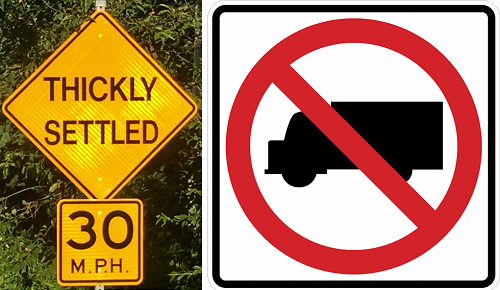 Above: The Select Board is looking to lower the Speed limit on the northern section of Parkerville Road, but would first have to revert it to a higher speed. In other road news, the Board is still waiting on a traffic study to help make decisions about truck exclusions.

At last week’s Select Board Meeting, there were updates on two items related to road safety in Southborough. One of those is an issue discussed in June that I never covered – a request to lower speeds on Parkerville Road. Another touched on the status of the Town traffic study and next steps.

Last month, resident Robert Maiorana asked the Select Board to make use of powers granted by Town Meeting to lower the speed to 25mph on Parkerville Road (north of Route 9). He explained that back when he was on the building committee for Trottier Middle School, they petitioned for the speed to be to 25 mph, but nothing came of it.

At the 2021 Annual Town Meeting, voters supported giving the Select Board the power to designate safety zones. That would allow them to lower speed limits to 25 mph (or even 20 mph in some areas).

Currently, the speed on Parkerville is 30 mph except in the school zone around Neary when that light is flashing.

At the June 14th meeting Vice Chair Chelsea Malinowski said that she looked into it and discovered that speeds on Parkerville Road were set by special acts of the legislature requested by Southborough in the 1970s. That needs to be rescinded before the Board can adjust the speed. That would revert the speed to 35 mph but allow the Board to lower it. They promised to look into it further.

Last week, Town Administrator Mark Purple shared that he inquired with MassDOT about how to rescind the special acts. The agency responded that it would be a simple process to rescind it to revert to statutory regulations. But they also warned in writing that under the law that the Select Board would use to lower speeds to 25 mph, a violation must be based on speeding for at least 1/8 of a mile. That means that “Instantaneous radar or laser readings are not adequate”.

Select Board member Lisa Braccio worried that would make enforcement too challenging and call for extra time in court. Acting Police Chief Newell was still in favor of lowering the speed. He said there were plenty of incidents where they make stops without radar based on people flying by. This would still allow them to pull over people going 10 mph over the limit. He also noted that the officers go to court all the time and he believed it would be fine.

They agreed to have Purple send a letter to MassDOT requesting the special acts be rescinded. In June, the Board agreed that when the acts were rescinded they would discuss voting to lower the speed on Parkerville and installing driver feedback signs. They would also discuss if similar actions made sense on other roads.

Last November, voters agreed to fund a study of the patterns of heavy trucks traveling throughout the town. It was a step that the Board wanted to take before agreeing to change which roads have truck exclusions.

Back in May, the public was told the study was concluded and a report would be out soon. At last Tuesday’s meeting, member Andrew Dennington stated that “a very preliminary set of data” had come back but the Board still hadn’t received the report. He indicated that they had expected to receive it by now. He knew that residents were frustrated that their request for a truck exclusion was still on hold.

The topic was raised as part of a discussion about what topics the Board would like the Public Works Planning Board to advise them on.

Chair Kathy Cook referred to PWPB Chair Bill Boland’s comments at a recent Planning Board meeting. She said it was clear that Boland had a different philosophy of the PWPB’s Board than some of the Select Board members do. However, he claimed that PWPB would advise the Select Board on projects if they make a request.

The Select Board discussed sending a letter with requests to the PWPB. The question was whether or not to do that before the PWPB’s meeting with the Capital Planning Committee tonight.

Malinowski said she would like to first hear what is said in tonight’s meeting. The Board will follow up on what recommendations to make at a future meeting.

In tonight’s PWPB meeting, members are scheduled to discuss what role their board will take (versus the Capital Planning Committee) in looking at Hopkinton’s request to connect to our town’s water supply, a Water Master Plan Review, and the Cordaville Road project.

Each member spoke about what items they would like the PWPB to deal with. For Dennington, looking at the Traffic Study report and making recommendations based on the results was an important one. Another safety item the Select Board are considering asking the PWPB to look at is updating/prioritizing the list of potential sidewalk projects.

There were also other items not related to safety the board is considering (like management of invasive plants and reevaluating how the Transfer Station handles recycling.) The Select Board may discuss a letter to PWPB at their August 9th meeting or at a brief, interim meeting to be scheduled for the purpose of approving an assessment center for police chief candidates.