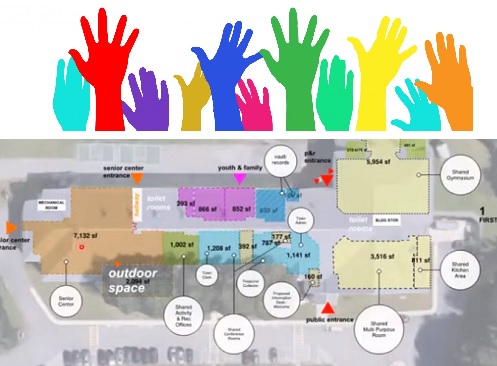 Above: The Town is soliciting volunteers to help explore options for a Southborough Community Center, including the use of Woodward School. At the same time, there are many other committees that could use a new member or two. (top from public domain image by Karen Arnold; bottom from Space Needs Study report)

The Select Board formed a Community Center Exploratory Committee. Now they are looking for volunteers to serve on it. While I’m sharing that news, I’m also sharing info on other committee with vacancies to fill.

In recent years, the Capital Planning Committee has been seeking the most fiscally responsible way to handle all of the Town’s growing municipal space needs.

That includes the building needs of the school system (with an aging Neary School building), the Senior Center (which has been advocating for more accessible space), and the Library (also looking for more space). Capital Chair Jason Malinowski reminded the Select Board last week it wouldn’t be affordable to invest in building/significant renovation projects for each of those.

A Community Center could be a way to combine addressing those needs. In addition, It should help with housing other Town Departments. (Some of them are in the South Union Building and Cordaville Hall which have infrastructure issues.)

The primary function of the new committee is to research options for a community center and make a recommendation to the Select Board.

The Select Board hopes the committee will help cement public “buy in” for whatever recommendation is pursued.

The idea was pitched by Malinowski who also chairs the Neary Building Committee.

The new ad-hoc committee will align with work being done by the Neary committee. The Neary Committee is overseeing a feasibility study into options for renovating or reconstructing Neary School. Their work includes exploring the possibility of consolidating schools by eliminating Woodward School.

As Malinowski explained to the Select Board, if the Neary Committee applies for funding from the Mass School Building Authority to pursue that route, MSBA will want to know what the Town will do with the Woodward building.

Last year, Capital hired a consultant to research the best uses of the Town’s buildings to house all of its existing and anticipated space needs. In January, the consultant presented a report. The recommendation focused on use of Woodward as a Community Center.

There was some concern from the Council on Aging about the building’s ability to house programs for seniors given the parking layout. And the Library Trustees weren’t enthused about an idea for an annex to house some of their services off site at Woodward or the Town House. At Malinowski’s urging, both groups have agreed to keep an open mind and continue discussions.

Two weeks ago, Malinowski told the Select Board that his committee has gone as far as it can go with the idea. The Town needs to determine if using Woodward as a community center is the right path (and will be publicly supported) or not.

He pushed for a committee representing the different constituencies to explore the best options. The charge includes looking at both Woodward and alternatives. Responsibilities include:

The Board will appoint 3-5 residents at large to the committee. The charge specifies 3 to allow the committee to meet quorum and start working as soon as possible. Depending on public interested, the Board may add more members after it gets started.

The Board planned to reach out to Southborough Youth and Family Services to see if they would like representation on the committee (either under at-large or as an ex-officio.)

To read the full committee charge, click here. To apply to serve on the committee, use the Citizen Activity Form here.

If you’re feeling volunteer minded, but the above committee doesn’t speak to you, there are many other open seats on existing committees. The Select Board is expected to fill some this Friday. But the following vacancies will still remain.

Below I included links to where you can find more information on the committees. Most are to the Town website, but some are to posts I wrote specifically about those committees’ volunteer searches in the past couple of years: