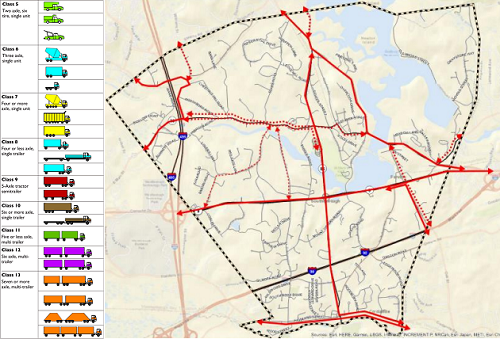 Above: The presentation shows how class 5+ vehicles travel in town and options for revamping exclusions. (images L-R from Federal Highway Administration and 8/9/22 meeting packet)

On Tuesday, the Select Board will hear recommendations for handling the problems caused by heavy trucks on Town roads.

Based on consultant VHB’s presentation, the Board may consider swapping the truck exclusion on Route 30 for ones on five Southborough back roads – plus two more overnight exclusions.

For years, residents have complained about safety issues on Flagg Road. Last year, the Select Board received a renewed a request to exclude large trucks on the road.

The Board learned that under state regulations, doing that would require designating an alternate route that meets state criteria. That was complicated by the pre-existing exclusion on Route 30.

Some Main Street residents expressed concern about the impact that lifting an exclusion on Route 30 would have.

Rather than quickly making changes that could have domino effects, the Board decided to study how trucks travel throughout town. VHB Engineering, the consulting firm for Public Works, was commissioned to look at the data.

Special Town Meeting voters approved funding that last fall. Data was collected in March. Now the long awaited (and seemingly overdue) report is scheduled to be presented at tomorrow night’s Select Board meeting.

A printed presentation in the packet previews some key findings.

VHB explains that HVEs (Heavy Vehicle Exclusions) are meant to apply to commercial vehicles with a carrying capacity greater than 2 ½ tons (vehicle classes 5-12, see image right). There are exceptions for those making deliveries on excluded streets or offshoots without alternative access. (Other exceptions are for public vehicles, ones owned by municipalities, or ones operated by utilities or for road construction.)

MassDOT will consider exclusions if HVs make up 5-8% of the road traffic OR the existing pavement structure/road condition is not suitable for heavy vehicles. (I think it is fair to assume that residents of Flagg Road and its offshoots would argue that the narrow road, narrowed even more in places by large trees, would qualify under the second condition.)

Towns can also apply for nighttime exclusions for residential neighborhoods. (According to MassDOT’s regulations, that only applies “during hours of darkness”.)

It appears the current Route 30 exclusion pre-dates regulation revisions in 1995 that made state numbered routes ineligible for exclusions.

Based on their look at traffic volume/patterns and the state restrictions for exclusions and alternate routes, VHB found that the Select Board could “consider”:

The analysis was based on data collected over 48 hours on an unspecified Wednesday and Thursday in March. Automatic Traffic Recorders were located at 12 locations and “Peak Hour Turning Movement Counts” were conducted at 9 locations. (You can find those locations in the agreement with VHB here.)

Among Town owned roads that don’t already have HVEs*, VHB’s study found that:

The presentation notes that the Board can also consider evaluating the existing signage for HVEs and monitoring traffic to identify changes in truck patterns.

You can see the entire presentation here. To attend the August 9th Select Board meeting (in person or over zoom) find the agenda and details here.

*Other roads listed with significant HV traffic already have exclusions and/or are state numbered routes.

This sounds like a reasonable plan, except that heavy vehicles should be excluded from Main St. east of Cordaville/Marlboro/Rte. 85. Is that possible?

It appears the current exclusion on Main St is grandfathered in. So that would come down to whether MassDOT would allow the original exclusion to be modified (only lifting a section of it) without claiming the entire route 30 exclusion would need to be rescinded under updated regulations.

It certainly seems to be a question worth asking.

How many residents are aware of this proposal? Probably very few, because it arose during summer vacations.

The “Heavy Truck Exclusion” (HVE), now existing along Main St, may be removed.
It was originally put in place by the Town Selectmen over 50 years ago, and has been very effective. Ironically, it is the current Town Select Board which is now considering it’s removal.

This HVE has been very effective for several reasons. It was intended to keep truck traffic on Rte 9, and prevent trucks from using Rte 30 (because it is approximately parallel to Rte 9). But in addition, it was intended to prevent trucks from using local side roads which connect at one end to Rt 30 (because of “Truck Exclusion Ahead” if they turn onto Rte 30).

Of course not all trucks could be excluded. Local deliveries are always allowed. And some other trucks do not obey the restriction, due to ignorance, or due to lack of enforcement. But for 50 years, most trucks have avoided Rte 30.

Rte 30 / Main St is almost entirely residential thru our town. It has schools (Fay, St Marks) and serves our tiny downtown, recently pedestrianized. It is not a suitable or safe route for huge, noisy, tractor-trailer trucks, which will seriously affect the quality of life of residents.

What will happen if the restriction is removed? The State-administered truck routes, which are linked to all truck computers with GPS (eg Waze), will change. They will intentionally guide trucks to use Rte 30 as a shortcut … to avoid Rte 9 congestion, and as a faster route from Framingham to the huge trucking warehouses, now being rapidly developed west of I-495, in both Marlborough and Westborough.

So why is the happening? At the Aug 9th Select Board meeting, a traffic consultant (paid by the Town) suggested the Town petition the State Highway Dept to remove the truck exclusion on Rte 30, in return for restricting trucks from other roads. In effect, swapping and sacrificing Rte 30 for safety elsewhere.

But the consultant had absolutely NO data on the possible consequences for future traffic on Rte 30. No data, just a personal opinion and speculation … “I don’t think there’s reason to be concerned”.

Well, even a cursory look reveals two, big trucking terminals along Rte 30, near or in Framingham … UPS and FedEx. So changing Rte 30 into a trucking route will allow all those trucks (not only the small delivery trucks, but also the much larger tractor-trailers) to use Main St to get to Westborough and further west, instead of using Rte 9 when it is frequently congested.

In addition, as several people commented at the August 9 meeting, unintended consequences will probably arise.

Be forewarned … If our town voluntarily removes this long-standing and effective HVE, then the State will NEVER give it back. Why not? Because the State wants more new truck routes, not less.

Please note what is happening, and make your concerns known. For instance, by sending your email to:
selectboard@southboroughma.com

Just to clarify – the Board didn’t vote to pursue the suggestion or even clearly come to a consensus to support it.

Members heard the presentation, asked, questions and took residents’ feedback. Several commenters argued against removing the Main St exclusion and pushed that the Town could purse other HVEs without lifting it.

Next steps weren’t specified except that Town Administrator Mark Purple told Board members that if they had comments/questions for the VHB consultant to “funnel” them through him and Asst. Town Manager Vanessa Hale.

I assume, the Board would have to address again at a future meeting in order to vote a plan of action – and it isn’t on the agenda for their next meeting on September 20th. Anyone interested can watch the discussion here.