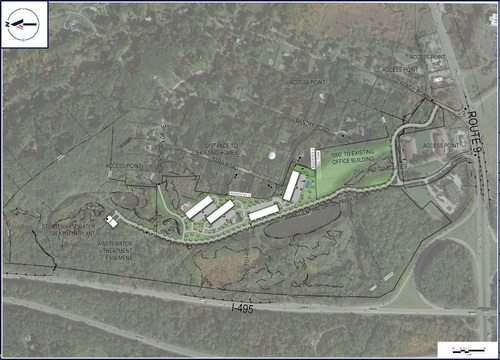 Above: The Select Board is seeking public comments to share with MassHousing on the new proposal for a 40B project on the Park Central parcel. (image cropped and edited from MassHousing application)

This afternoon, the Town announced that the comment period was extended for the Park Central 40B proposal.

The email states that the Select Board was successful in receiving an extension to submit comments to MA Housing:

Comments from town departments or the public are now due Monday, September 12, 2022, by emailing selectmenoffice@southboroughma.com or delivering written comments to the Selectmen’s Office at 17 Common Street [Town House]. All comments will be attached to the letter of response by the Select Board and sent to MA Housing

The deadline to comment to the Select Board is 10 days prior to their deadline to submit their letter with the packet. The gap will allow them to organize comments. It may also influence what they include/emphasize in their cover letter.

The original deadline for the Town to respond was one month sooner, August 22nd. Last night, Town Administrator Mark Purple told the Select Board that a 15 day extension is automatically granted upon request. He was seeking an extension to September 30th.

Purple explained to Southborough’s contact at MassHousing that residents tend to disengage over the summer. This is a big project. The extension would allow residents to “catchup a little” after their return before submitting comments to the Board. Based on today’s email, it appears MassHousing compromised by extending it to September 22nd.

The focus of last night’s agenda item was the Board’s process for commenting on the proposal. Members planned to submit their substantive comments to Purple for consolidation.

Last night’s discussion gave a preview of some of their concerns, and those of residents, including questions about appearances of conflict. My summary of that will have to wait for another day.*

The Board is scheduled to meet again on September 7th. I would expect the topic to be revisited at that meeting. (So if you want your thoughts to be considered in that discussion, you may want to submit them sooner.)

*(I started to write up discussion highlights – but it was taking too long and I have to log off. Rather than holding up sharing this news, I’ll save that for another post. In the meantime, you can watch the ½ hour discussion here.)