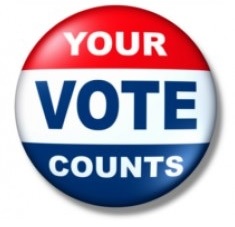 Something I just learned and confirmed that I want to share – all registered voters can participate in the Republican or Democratic primaries.

As I’ve previously written, if you are a member of one of the two big parties, you can only vote on their ballot. If you are unenrolled in either, you can choose which to vote in.

What I hadn’t realized was that voters registered for third parties (Libertarian, Green, Rainbow, etc), also get to participate and choose their ballot. That is because none of those political groups met the threshold to be treated as a real “party” in this primary. (When third parties do qualify for their own ballots, members are then restricted to voting on those ballots.)

Libertarians currently have the same status as members of the “Pizza Party” and a long list of other political “designations”. (That may change for the 2024 primaries.)

Below is my reminder of who is on each ballot and where/how you can cast yours.

With today’s downpour, I’m guessing many voters wish they took advantage of early alternative options. If you still have your mail-in ballot – make sure to get it  into the drop box at the Town House (17 Common St) before 8:00 pm.

Otherwise, you need to head to the gym at Trottier Middle School (49 Parkerville Road) to vote today. The polls are open until 8:00 pm. (The entrance is on the side of the building facing the outdoor track.)

If you have any questions about voting, you can leave a voicemail for the Town Clerk at 508-485-0710 ext 3005 or email townclerk@southboroughma.com. (The office is closed today so staff can oversee the election. You can find them in person at Trottier.)

Contests on the ballot

Below are details on who is competing for votes in the primaries. (For those that have campaign websites I could find, I inserted links so you can research their positions.) Only Democratic and Republican parties are holding primaries for our precincts.

We already know which candidates will be on the ballot this fall for the following positions. (Some of the uncontested candidates don’t even have opponents on another primary ballot. The deadline has passed for Non-Party candidates to file to add their names to the November ballot. I’m not aware that any have, but can’t yet rule out that possibility.)