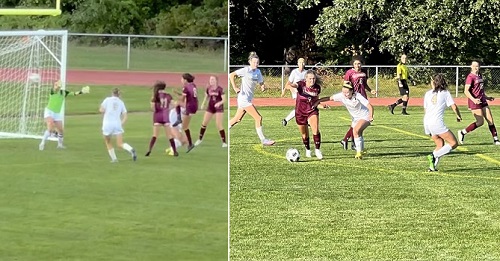 Above: Girls Soccer is the Titans’ only traditional team sport boasting more wins than losses at this point in the season, though their record is dominated by ties. (images from Shrewsbury match cropped from tweet by @ARHSAthletics)

Algonquin’s varsity sports had a rough week. The Titans lost 9 out of 13 contests. Only one team scored any wins.

Not all of the teams suffered losses. Girls Soccer tied both of their games last week. (0-0 with Concord-Carlisle and 2-2 with Shrewsbury.) That brings their record to 1-0-3, making them the school’s only traditional team sport with more wins than losses. The Telegram covered the Girls new coach this season, ARHS English teacher John Frederick:

Frederick previously coached the boys’ soccer team at Algonquin for 10 years, leading the then Tomahawks to Division 1 state championships in 2004 and ’05. He also led Algonquin to a state championship appearance in 2006 but came up short of a three-peat, falling to St. John’s Prep.

For fans of two teams, it was a disappointing follow up to their strong opening week. Girls Volleyball’s losses to Shrewsbury (3-2) and Acton Boxborough (3-0) lowered their record to 2-2.

[Note: I learned through the grapevine that a member of the Algonquin’s team suffered a serious leg injury during Friday’s game. That’s clearly much more devastating than captured by a score.

The team tweeted: “Tough, emotional loss tonight. The boys battled adversity and played until the very end – for each other. #Family”]

Based on a prior article in the Telegram, in the long run, that loss may be less important than the close score.

The article shared the team’s new strategy that may result in more losses this season than last as it battles tougher teams in hopes of making it into the playoffs:

It’s likely that few football-related situations could test the program’s collective patience quite like last season’s disappointment when despite a 6-2 record, the Titans were left on the outside of the inaugural MIAA statewide playoffs, falling victim to a complex algorithm that few local fans can fully grasp.

This season, Algonquin has taken a two-fold approach to doing its best to make sure its postseason invitation arrives.

The first was to ensure that each returning player had that feeling of dejection etched in their memories and used it to fuel what Allen reported was a hard-working summer of improvement. The second was to hunt bigger, better opponents so that the concept of strength of schedule would have no chance of submarining the run to the postseason.

Cross Country’s meets have been repeatedly postponed. The Boys’ and Girls’ first meets are now scheduled for Wednesday, followed by participation in a RI invitational tournament this weekend.

Now, here are the ARHS varsity games on tap for the week:

Updated (9/19/22 6:25 pm): I updated the information on last Friday’s Football game (including corrected score) after learning that one of their players apparently suffered a serious leg injury.