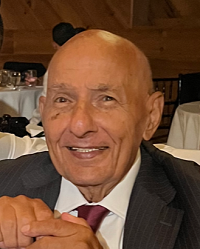 When someone asked Dom Bettinelli how he was doing, his answer was always “Now that I’ve seen you, Fantastic!” His positivity and enthusiasm were contagious for his entire life, right up until his unexpected death on Sunday, September 25, 2022. He will be missed by family and friends.

Domenico B. “Dom” Bettinelli, 89, died unexpectedly Sunday, September 25, 2022, at the Milton Hospital in Milton. He was the husband of the late Maryellen (Fidler) Bettinelli. Born in Boston, he was raised in the West End and was a graduate of Boston Trade School. After his graduation, he joined the US Navy and served from October of 1951 until his Honorable Discharge in August of 1955, including over 1 year overseas. Dom was a resident of Hyde Park and Jamaica Plain for several years before moving to Canton to raise his family. He was a resident of Canton for over 15 years before spending over 15 years in Southboro. Five years ago, he moved to Stoughton to be closer to his family. Dom was a longtime employee of Raytheon in Waltham, working for 45 years and retiring many years ago. After his retirement, he worked in the kitchen at Trinity Catholic in Newton and also in the Deli Department at Shaw’s in Ashland where he was known as “Dom in the Deli”. He was a devout Catholic and a daily communicant of Immaculate Conception Church in Stoughton and formerly at St. Matthews Church in Southboro. Dom had several quotes that he would live by, including “It doesn’t cost anything to be nice” and “Has anyone told you today that I Love You”. He was a dedicated father and a beloved Nanu of 26 grandchildren, who loved to tell stories, watch sports and westerns, play cards with his sisters and, above all, spend time surrounded by his beloved family.

Funeral will be held from the Farley Funeral Home, 358 Park St. (Rt. 27) Stoughton on Friday at 9:45 AM followed by a Funeral Mass at Immaculate Conception Church, Stoughton at 11 AM. Visiting Hours will be held in the Funeral Home on Thursday from 5-8 PM. Burial will be at the Massachusetts National Cemetery, Bourne. Due to Floral Restrictions at the cemetery, Dom’s family has requested memorial donations be made to Catholic Relief Services, POB 17090, Baltimore, MD 21297.